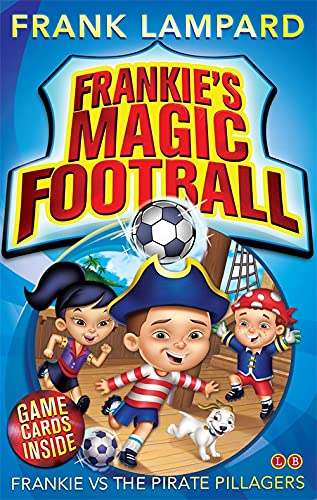 Frankie and his team love playing football. There's always time for a game.

But when they win an old football at a carnival, they're going to be transported to a magical world of football they never knew existed!

Can Frankie and his team beat the Pirate Pillagers and make their way home?

A crowd-pleasing, pirate-battling adventure that will appeal to both boys and girls * Scribbler Magazine *
A great book for new readers with a love of football * Bridlington Free Press *
Lampard has created characters that hold well * Nottingham Post *
Fun and easy to read * The Sun *
Really funny ... very exciting -- Joe Turton * Match of the Day Weekly *
Fun and easy to read. * The Sun *
The book is deft and well-structured: a magic football . . . takes Frankie and his friends into assorted fantasy worlds, where they must play high-stakes matches against pillaging pirates * The Times *

Frank Lampard is a footballer, father and author of the 'Frankie's Magic Football' series! To date, Frank remains Chelsea Football Club's all-time leading goal scorer, where he was awarded three times Chelsea Player of the Year. In 2014 Frank was the vice captain on the England football squad at the World Cup in Brazil, and then went on to play for Manchester City in 2014 in the UK before signing with New York City FC to play as part of the Major League Soccer side, starting July 2015. Frank was awarded an OBE in the 2015 Queen's Birthday Honours List for his services to football. Frank enjoys reading with his two daughters, and when they requested stories about football Frank decided to create his own characters and adventures to entertain them. These tales provided the inspiration for 'Frankie's Magic Football'. Frank is passionate about promoting child literacy and is an ambassador of the National Literacy Trust; he hopes to inspire both young girls and boys to read with the 'Frankie's Magic Football' series. "The idea for 'Frankie's Magic Football' came from reading bedtime stories to my daughters. Adventure stories are their favourite and I wanted to combine my love for football with something that I could read to them, and that they would love too. 'Frankie's Magic Football' reminds me of the stories that I used to like to read. Frankie's friends also remind me of the mates that I used to kick a football about with when I was young, as well as some of the players I've met during my career." - FRANK LAMPARD

GOR004916096
Frankie's Magic Football: Frankie vs The Pirate Pillagers: Book 1 by Frank Lampard
Frank Lampard
Frankie's Magic Football
Used - Very Good
Paperback
Hachette Children's Group
2013-06-06
96
0349001626
9780349001623
N/A
Book picture is for illustrative purposes only, actual binding, cover or edition may vary.
This is a used book - there is no escaping the fact it has been read by someone else and it will show signs of wear and previous use. Overall we expect it to be in very good condition, but if you are not entirely satisfied please get in touch with us.