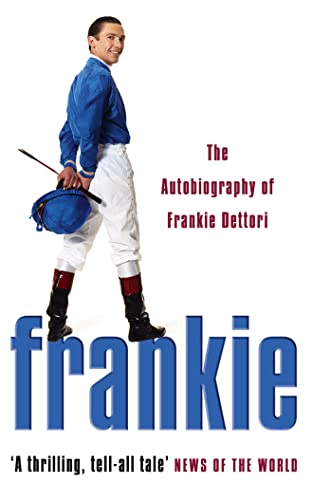 Irresistible to the punters, champion jockey Frankie Dettori is a charismatic personality with an easy charm and immaculate dress sense that make him an instant favourite on the track and a household name off it. His autobiography has been fully updated to include Frankie's record-breaking racing exploits in 2004.

Irresistible to the punters, champion jockey Frankie Dettori is a charismatic personality with an easy charm and immaculate dress sense that make him an instant favourite on the track and a household name off it. His autobiography has been fully updated to include Frankie's record-breaking racing exploits in 2004.

In his own words, Frankie Dettori charts his rise from stable lad to champion jockey, revealing the endless hours of hard work, the fun along the way, and his determination to succeed against the odds.

Frankie relives his nine Classic winners in the UK and talks about his notable victories at the St Leger, The Breeder's Cup Mile, the Arc de Triomphe, the Queen Elizabeth II Stakes, and, memorably, his seven winners on the same card at Ascot in 1996. He also shares the secrets of his successful partnerships with trainers like Luca Cumani and John Gosden, and owners such as Sheikh Mohammed of the Goldolphin organisation.

This is also a human interest story. Frankie talks openly about using drugs to keep his weight down, his celebrity role as team captain on `A Question of Sport', his rich and varied lifestyle outside of racing, including his family and inner circle, and of the moment when he almost lost his life following a plane crash.

Controversial, informative and hugely entertaining, Frankie Dettori's life story will appeal to the millions of people who follow the sport as well as those intrigued to know more about one of the greatest talents that horse-racing has ever seen.

`An odds-on winner' The Irish Field

`He's that rare thing in horseracing - a real superstar' BBC

`A gripping read that will prove a well-received Christmas present for anybody, whether a racing nut or not.' Horse & Hound

'A great read for anyone interested in racing.' Irish Independent

'Not since Lester Piggott stopped riding has racing been able to identify itself with a Christian name alone. Way beyond the confines of the betting office and the racetrack, people know who Frankie is.' The Sunday Times

Frankie Dettori was born in Milan in December 1970. He was sent to Newmarket at the age of 16 by his father, Lanfranco, a former Italian champion jockey, where he worked as a bookie before being taken up by the trainer Luca Cumani. In 1990 he became the first teenager since Lester Piggott to ride 100 winners in a season. In the next ten years he became one of the most successful jockeys the flat has ever seen, and was awarded an MBE in 2000. He is currently the No 1 stable jockey for Godolphin. He has a wife, Catherine, and four children.

Jonathan Powell is horse racing correspondent on the Mail on Sunday.

GOR000770899
Frankie: The Autobiography of Frankie Dettori by Frankie Dettori
Frankie Dettori
Used - Very Good
Paperback
HarperCollins Publishers
2005-05-03
448
0007176872
9780007176878
N/A
Book picture is for illustrative purposes only, actual binding, cover or edition may vary.
This is a used book - there is no escaping the fact it has been read by someone else and it will show signs of wear and previous use. Overall we expect it to be in very good condition, but if you are not entirely satisfied please get in touch with us.