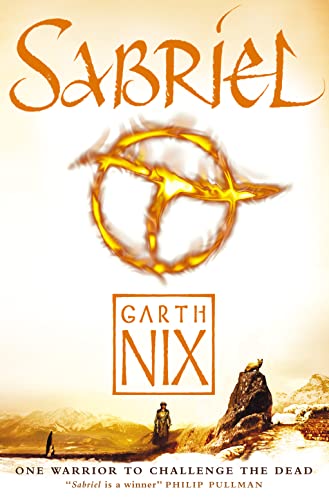 Who will guard the living when the dead arise?

Who will guard the living when the dead arise?

Sabriel is sent as a child across the Wall to the safety of a school in Ancelstierre. Away from magic; away from the Dead. After receiving a cryptic message from her father, 18-year-old Sabriel leaves her ordinary school and returns across the Wall into the Old Kingdom. Fraught with peril and deadly trickery, her journey takes her to a world filled with parasitical spirits, Mordicants, and Shadow Hands - for her father is none other than The Abhorson. His task is to lay the disturbed dead back to rest. This obliges him - and now Sabriel, who has taken on her father's title and duties - to slip over the border into the icy river of Death, sometimes battling the evil forces that lurk there, waiting for an opportunity to escape into the realm of the living. Desperate to find her father, and grimly determined to help save the Old Kingdom from destruction by the horrible forces of the evil undead, Sabriel endures almost impossible challenges whilst discovering her own supernatural abilities - and her destiny.

"Sabriel is a winner, a fantasy that reads like realism. I congratulate Garth Nix." Philip Pullman

"This 'good versus evil' tale is raised above the rest of the fantasy genre by the quality of Garth Nix's imagination and the beauty of his writing...destined to become a classic." Helen Davies, Books Etc

"Captured the mood of fantasy with such realism that I was enthralled from beginning to end, a really cracking story!" Diane Sinclair, Sales Promotions Manager, Askew's Library Services

Garth Nix was born in 1963 and grew up in Canberra, Australia. After taking his degree in professional writing from the University of Canberra, he worked in a bookshop and then moved to Sydney. There he sank lower into the morass of the publishing industry, steadily devolving from sales rep through publicist until in 1991 he became a senior editor with a major multinational publisher. After a period travelling in Eastern Europe, the Middle East and Asia in 1993, he left publishing to work as a marketing communications consultant . In 1999 he was lured back to the publishing world to become a part-time literary agent. He now lives in Sydney, a five-minute walk from Coogee Beach, with his wife, Anna, and lots of books. Sabriel is his first book for young adults.

GOR009919078
Sabriel by Garth Nix
Garth Nix
Used - Like New
Paperback
HarperCollins Publishers
2003-05-06
368
0007137311
9780007137312
Short-listed for WH Smith Book Awards (Children's Book of the Year) 2003
Book picture is for illustrative purposes only, actual binding, cover or edition may vary.
The book has been read, but looks new. The book cover has no visible wear, and the dust jacket is included if applicable. No missing or damaged pages, no tears, possible very minimal creasing, no underlining or highlighting of text, and no writing in the margins.