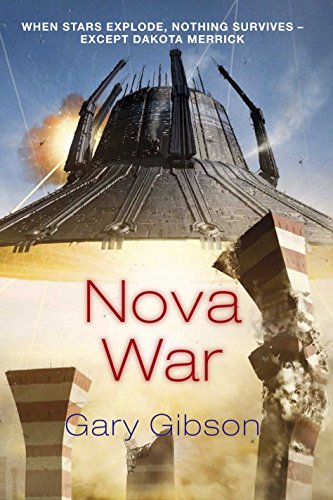 In Stealing Light, Dakota discovered the Shoal's dark and dangerous secret, now she works towards stopping not only the spread of this knowledge, but also the onset of the Nova war.

Found adrift near a Bandati colony world far away from Consortium space, Dakota and Corso find themselves prisoners of the Bandati.

It becomes rapidly clear to them, that the humanity's limited knowledge of the rest of the galaxy - filtered through the Shoal - is direly inaccurate. The Shoal have been fighting a frontier war with a rival species, the Emissaries, with their own FTL technology for over fifteen thousand years.

Realising that the Shoal may be the Galaxy's one chance at sustained peace, Dakota is forced to work with Trader to prevent the spread of deadly knowledge carried on board the Magi ships. But it seems that the Nova War is inevitable...

Gary Gibson has worked as a graphic designer and magazine editor, and began writing at the age of fourteen. He's originally from Glasgow, but currently lives in Taiwan. His previous novels include his Shoal trilogy plus the standalone books Angel Stations, Against Gravity, Final Days and The Thousand Emperors. He's also writtenMarauder, a book connected to the Shoal universe. Survival Game is the fast-paced follow up to Extinction Game. You can find out more about Gary and his work at garygibson.net.

GOR001391771
Nova War by Gary Gibson
Gary Gibson
Used - Very Good
Hardback
Pan Macmillan
2009-09-04
416
0230706800
9780230706804
N/A
Book picture is for illustrative purposes only, actual binding, cover or edition may vary.
This is a used book - there is no escaping the fact it has been read by someone else and it will show signs of wear and previous use. Overall we expect it to be in very good condition, but if you are not entirely satisfied please get in touch with us.