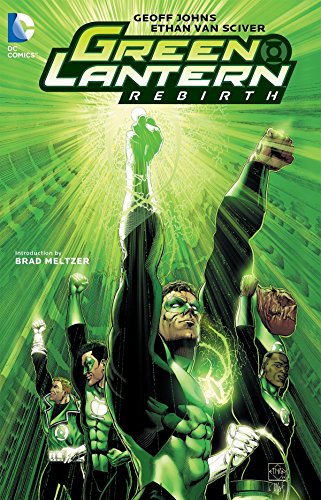 Used Price
£4.99
New RRP £12.99
Free Shipping in the UK
Bestselling writer Johns revitalizes Green Lantern and sets the stage for "Blackest Night" in this collection of issues #1-6. Longtime readers will thrill at seeing one of the DC Universe's best mythologies begin to return to its former glory.--"The Washington Post."
Reviews:
Trustpilot
Like New Very Good Good

Written by Geoff Johns Art by Ethan Van Sciver and Prentis Rollins Cover by Ethan Van Sciver The six-issue miniseries that restored Hal Jordan as Earth's Green Lantern now features a new cover by Ethan Van Sciver. This collection also includes the preview story from Wizard Magazine! See how a man born without fear rebuilds his life, putting cosmic forces into motion that will have repercussions on Earth and across the universe. Advance-solicited; on sale October 7 * 160 pg, FC, $14.99 US

"Rebirth was a smash serialized; the collected edition should be equally popular."--Booklist

"This is comic book storytelling at its absolute finest."--IGN

Geoff Johns is an award-winning writer and one of the most popular contemporary comic book writers today. Johns is the author of The New York Times bestselling graphic novels Aquaman: The Trench, Blackest Night, Green Lantern: Sinestro Corps War, Justice League: Origin, Superman: Brainiac and Batman: Earth One which hit #1 on the bestseller list. He is also known for transforming Green Lantern into one of the most critically and commercially successful franchises in comics.

GOR008108918
Green Lantern: Rebirth (New Edition) by Geoff Johns
Geoff Johns
Used - Like New
Paperback
DC Comics
2010-04-21
160
1401227554
9781401227555
N/A
Book picture is for illustrative purposes only, actual binding, cover or edition may vary.
The book has been read, but looks new. The book cover has no visible wear, and the dust jacket is included if applicable. No missing or damaged pages, no tears, possible very minimal creasing, no underlining or highlighting of text, and no writing in the margins.