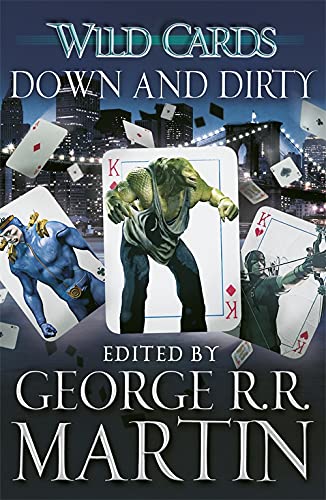 Wild Cards: Down and Dirty
by George R.R. Martin

Wild Cards: Down and Dirty Summary

Wild Cards: Down and Dirty by George R.R. Martin

The return of the famous shared-world superhero books created and edited by George R. R. Martin, author of A GAME OF THRONES

When an alien virus struck the Earth decades ago, it spawned a new breed of superhuman men and women. Those with useful mutations were known as Aces, those with deformities as Jokers.

Now, in New York's Jokertown, a savage street war has broken out between the Mafia and a gang known as the Shadow Fists. A courageous band of Aces must go underground to wage a war against the powers of the criminal netherworld.

Edited by George R.R. Martin and including a story by him, this volume also features stories from Roger Zelazny, Pat Cadigan, Melinda M. Snodgrass and many more.

George R.R. Martin published his first story in 1971 and quickly rose to prominence, winning four HUGO and two NEBULA AWARDs in quick succession before he turned his attention to fantasy with the historical horror novel FEVRE DREAM, now a Fantasy Masterwork. Since then he has won every major award in the fields of fantasy, science fiction and horror. His magnificent epic saga A Song of Ice and Fire is redefining epic fantasy for a new generation. George R.R. Martin lives in New Mexico.