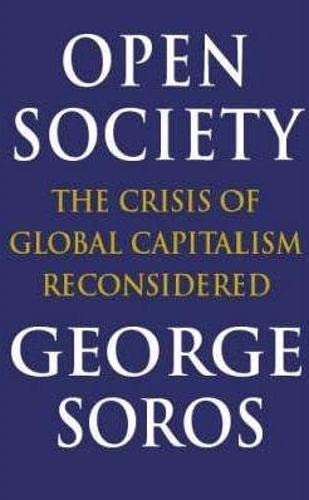 In Stock
£6.99
Reforming Global Capitalism: A substantial revaluation of his international bestseller by a legendary financier and philanthropist.
Very Good Good Well Read
5 in stock

George Soros is a legend in the world of finance. His Quantum Fund has been the best performing investment fund in history and his foundations have helped re-shape the post-Cold War world.
In this thoroughly revised version of his international bestseller, George Soros reconsiders his analysis in the light of recent economic events. We need to improve our international arrangements to match our increasing economic interdependence. Soros proposes that the open societies of the world should form an alliance for the dual purpose of fostering the development of open society within individual countries, and to lay the groundwork for a global open society by strengthening international institutions and rules of behaviour. Whilst the hardback edition emphasised the financial side of the system, the paperback adds more weight to its political aspects. Offering brilliant solutions based on years of Soros's own experience as a financier and philanthropist, THE CRISIS OF GLOBAL CAPITALISM is essential reading for anyone involved with the new economy - that is, all of us.

'An authentic financial genius' SPECTATOR 'The Chieftain of market speculators...Soros is a financial genius' SUNDAY TIMES 'His success has been unparalleled in the history of finance' THE TIMES 'One of the finest economic thinkers of this age.' IRELAND ON SUNDAY 'Soros has produced another thought-provoking book and has again put this mouth where his money is.' IRISH TIMES 'The symptoms are hard to ignore. First the Thai crisis precipitated the currency collapse in Asia. Next the Russian meltdown inflicted temporary chaos on the Western financial system. And the recent volatility of the world's stock markets has caused most investors a lot more than heartburn. The connection? According to billionaire philanthropist George Soros, there's a profound and dangerous imbalance between the explosive growth of the global economy and the development of a free and open society. In The Crisis of Global Capitalism, Soros argues that in the last 20 years, the emergence of "market fundamentalism"--that is, the idea that markets need only be regulated by the forces of profit and competition--has distorted the role of capital to the extent that it "is today a greater threat to open society than any totalitarian ideology." Not that Soros advocates the demise of the capitalist system. On the contrary, Soros himself has made billions on Wall Street, and it's his aim to save capitalism from itself. While his theory of reflexivity reads a bit thick, his analysis of our present financial system is lucid and convincing. If wondering about the stability of today's markets keeps you up at night, then put this book at your bedside. Highly recommended.' - Harry C. Edwards, AMAZON.COM

* George Soros oversees a global network of foundations dedicated to supporting open societies, and is world-renowned for his financial brilliance.

GOR001167529
Open Society: Reforming Global Capitalism by George Soros
George Soros
Used - Very Good
Paperback
Little, Brown & Company
2000-12-07
400
0316855987
9780316855983
N/A
Book picture is for illustrative purposes only, actual binding, cover or edition may vary.
This is a used book - there is no escaping the fact it has been read by someone else and it will show signs of wear and previous use. Overall we expect it to be in very good condition, but if you are not entirely satisfied please get in touch with us.