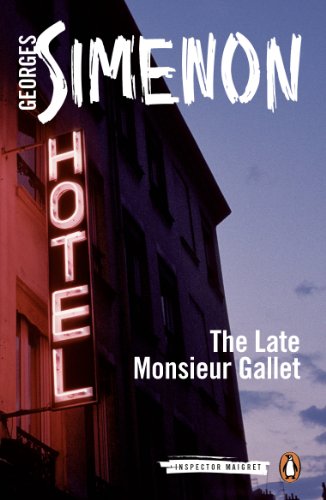 Used Price
£4.99
New RRP £8.99
Free Shipping in the UK
Instead of the detail filling itself in and becoming clearer, it seemed to escape him. The face of the man in the ill-fitting coat misted up so that it hardly looked human. The circumstances of Monsieur Gallet's death all seem fake: the name the deceased was travelling under and his presumed profession, and more worryingly, his family's grief.
Reviews:
Trustpilot
Very Good Good

The second book in the new Penguin Maigret series: Georges Simenon's devastating tale of misfortune, betrayal and the weakness of family ties, in a new translation by Anthea Bell.

Instead of the detail filling itself in and becoming clearer, it seemed to escape him. The face of the man in the ill-fitting coat just misted up so that it hardly looked human. In theory this mental portrait was good enough, but now it was replaced by fleeting images which should have added up to one and the same man but which refused to get themselves into focus.

The circumstances of Monsieur Gallet's death all seem fake: the name the deceased was travelling under and his presumed profession, and more worryingly, his family's grief. Their haughtiness seems to hide ambiguous feelings about the hapless man. In this haunting story, Maigret discovers the appalling truth and the real crime hidden behind the surface of lies.

Penguin is publishing the entire series of Maigret novels in new translations. This novel has been published in previous translations as Maigret Stonewalled and The Death of Monsieur Gallet.

'One of the greatest writers of the twentieth century' Guardian

"One of the greatest writers of the twentieth century . . . Simenon was unequaled at making us look inside, though the ability was masked by his brilliance at absorbing us obsessively in his stories." --The Guardian

"These Maigret books are as timeless as Paris itself." --The Washington Post

"Maigret ranks with Holmes and Poirot in the pantheon of fictional detective immortals." --People

"I love reading Simenon. He makes me think of Chekhov." --William Faulkner

"The greatest of all, the most genuine novelist we have had in literature." --Andre Gide

"A novelist who entered his fictional world as if he were a part of it."lle --Peter Ackroyd

Georges Simenon was born in Liege, Belgium, in 1903. He is best known in Britain as the author of the Maigret novels and his prolific output of over 400 novels and short stories have made him a household name in continental Europe. He died in 1989 in Lausanne, Switzerland, where he had lived for the latter part of his life.

GOR005460051
The Late Monsieur Gallet: Inspector Maigret #2 by Georges Simenon
Georges Simenon
Inspector Maigret
Used - Very Good
Paperback
Penguin Books Ltd
2013-12-05
176
0141393378
9780141393377
N/A
Book picture is for illustrative purposes only, actual binding, cover or edition may vary.
This is a used book - there is no escaping the fact it has been read by someone else and it will show signs of wear and previous use. Overall we expect it to be in very good condition, but if you are not entirely satisfied please get in touch with us.