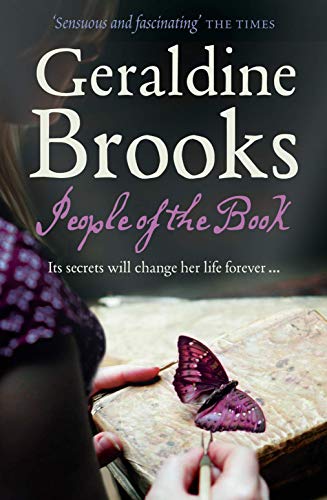 People of the Book
by Geraldine Brooks

The new novel from the author of `March' and `Year of Wonders' takes place in the aftermath of the Bosnian War, as a young book conservator arrives in Sarajevo to restore a lost treasure.

People of the Book Summary

People of the Book by Geraldine Brooks

The new novel from the author of `March' and `Year of Wonders' takes place in the aftermath of the Bosnian War, as a young book conservator arrives in Sarajevo to restore a lost treasure.

When Hannah Heath gets a call in the middle of the night in her Sydney home about a precious medieval manuscript which has been recovered from the smouldering ruins of wartorn Sarajevo, she knows she is on the brink of the experience of a lifetime. A renowned book conservator, she must now make her way to Bosnia to start work on restoring The Sarajevo Haggadah, a Jewish prayer book - to discover its secrets and piece together the story of its miraculous survival. But the trip will also set in motion a series of events that threaten to rock Hannah's orderly life, including her encounter with Ozren Karamen, the young librarian who risked his life to save the book.

As meticulously researched as all of Brooks's previous work, `People of the Book' is a gripping and moving novel about war, art, love and survival.

People of the Book Reviews

'Brooks expertly guides us to the conclusion that the world is made up of only two types of people: those who would destroy books and those who would give their lives to save them. This illuminating novel, like its predecessor, is well worthy of both Pulitzer and prime-time approbation.' Independent on Sunday

'These stories have a raw and visceral power. The book is full of historical detail.' Naomi Alderman, F.T. Magazine

'An irresistible subject, given urgency by its timeliness and poignancy by its paradoxicality: for the novel is based on the true story of an ancient Jewish codex saved from the fire by a Muslim librarian. Her performance will satisfy many readers.' Guardian

'The epic themes of love and war are her preferred canvas and here she sets up multiple narrative strands to tell the turbulent story of this Haggadah. Anti-Semitism is the momentum propelling the book's extraordinary journey forwards and Brooks evokes her various fraught historical-religious conflicts vividly.' Metro

`Even more compelling than the detective plot is the novel's portrayal of the harrowing lives of its historical characters. Brooks is a compassionate writer. "People of the Book" is a powerful account of individual resistance to intolerance and the precious value of history. It is also a gripping story.' TLS

'The descriptions are sensuous and the story fascinating.' The Times'

GOR001148300
People of the Book by Geraldine Brooks
Geraldine Brooks
Used - Very Good
Paperback
HarperCollins Publishers
2008-10-01
400
0007177429
9780007177424
N/A
Book picture is for illustrative purposes only, actual binding, cover or edition may vary.
This is a used book - there is no escaping the fact it has been read by someone else and it will show signs of wear and previous use. Overall we expect it to be in very good condition, but if you are not entirely satisfied please get in touch with us.