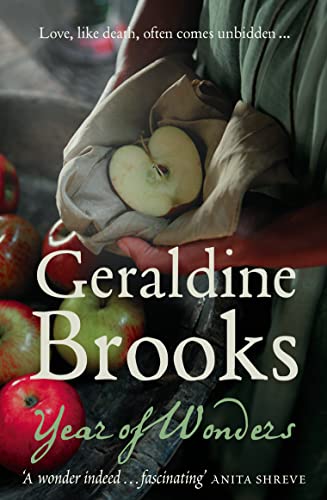 Year of Wonders
by Geraldine Brooks

From the Pulitzer Prize-winning author of `March' and `People of the Book'.

A young woman's struggle to save her family and her soul during the extraordinary year of 1666, when plague suddenly struck a small Derbyshire village.

Year of Wonders by Geraldine Brooks

From the Pulitzer Prize-winning author of `March' and `People of the Book'.

A young woman's struggle to save her family and her soul during the extraordinary year of 1666, when plague suddenly struck a small Derbyshire village.

In 1666, plague swept through London, driving the King and his court to Oxford, and Samuel Pepys to Greenwich, in an attempt to escape contagion. The north of England remained untouched until, in a small community of leadminers and hill farmers, a bolt of cloth arrived from the capital. The tailor who cut the cloth had no way of knowing that the damp fabric carried with it bubonic infection.

So begins the Year of Wonders, in which a Pennine village of 350 souls confronts a scourge beyond remedy or understanding. Desperate, the villagers turn to sorcery, herb lore, and murderous witch-hunting. Then, led by a young and charismatic preacher, they elect to isolate themselves in a fatal quarantine. The story is told through the eyes of Anna Frith who, at only 18, must contend with the death of her family, the disintegration of her society, and the lure of a dangerous and illicit attraction.

Geraldine Brooks's novel explores love and learning, fear and fanaticism, and the struggle of 17th century science and religion to deal with a seemingly diabolical pestilence. `Year of Wonders' is also an eloquent memorial to the real-life Derbyshire villagers who chose to suffer alone during England's last great plague.

`One of the best novels I've ever clapped eyes on' Jenni Murray, Woman's Hour

`Geraldine Brooks's impressive novel goes well beyond chronicling the devastation of a plague-ridden village. It leaves us with the memory of vivid characters struggling in timeless human ways with the hardships confronting them - and the memory, too, of an elegant and engaging story.' Arthur Golden, author of `Memoirs of a Geisha'

`Geraldine Brooks's `Year of Wonders' is a wonder indeed. The novel gives the reader a remarkable glimpse into a 17th century horror, but does so with both compassion and exuberance. Read it for the inventiveness of the language alone - a genuine treat.' Anita Shreve, author of `The Pilot's Wife' and `The Last TIme They Met'

'More than a mountain of corpses, more than a sensual evocation of the Sapphic bond between two women, more than a pulse-quickening tale, `Year of Wonders' is a staggering fictional debut.' Guardian

`'Year of Wonders' carries absolute conviction as an evocation of place and mood. It has a vivid imaginative truth, and is beautifully written.' Hilary Mantel

GOR000986435
Year of Wonders by Geraldine Brooks
Geraldine Brooks
Used - Very Good
Paperback
HarperCollins Publishers
2001-01-01
336
184115458X
9781841154589
Short-listed for Westfield/Waverley Library Literary Award 2002
Book picture is for illustrative purposes only, actual binding, cover or edition may vary.
This is a used book - there is no escaping the fact it has been read by someone else and it will show signs of wear and previous use. Overall we expect it to be in very good condition, but if you are not entirely satisfied please get in touch with us.