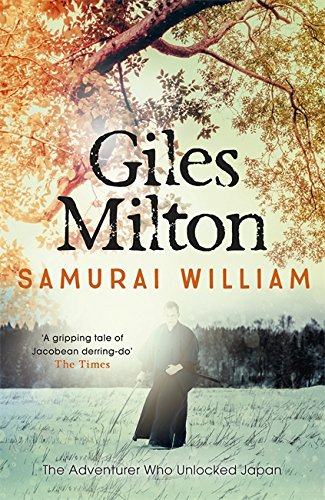 In Stock
£5.99
Bestselling author Giles Milton takes us on a fascinating Jacobean adventure.
Like New Very Good Good
Only 3 left

Samurai William: The Adventurer Who Unlocked Japan by Giles Milton

In 1611 an astonishing letter arrived at the East India Trading Company in London after a tortuous seven-year journey. Englishman William Adams was one of only twenty-four survivors of a fleet of ships bound for Asia, and he had washed up in the forbidden land of Japan.

The traders were even more amazed to learn that, rather than be horrified by this strange country, Adams had fallen in love with the barbaric splendour of Japan - and decided to settle. He had forged a close friendship with the ruthless Shogun, taken a Japanese wife and sired a new, mixed-race family.

Adams' letter fired up the London merchants to plan a new expedition to the Far East, with designs to trade with the Japanese and use Adams' contacts there to forge new commercial links.

Told with Stevensonian gusto ... A revelation * Jane Gardam, Spectator *
Anyone who enjoyed Shogun ... will love this * Lancashire Evening Post *
Samurai William is a great read and fairly romps along * What's On *
A page-turner of a book... an accessible, well-crafted piece of popularised history. * Allan Spence, The Scotsman *
Giles Milton has once again shown himself to be a master of historical narrative... a gripping tale of Jacobean derring-do, a fizzing, real-life, Boys' Own adventure underpinned by genuine scholarship. * Katie Hickman, The Sunday Times *
Giles Milton again expertly navigating the eastern seas * Economist *
Milton has brought the era to life, conveying nuances of character and the values of the time. * The Sunday Times *
The thoroughness and intelligence of his research underpins the lively confidence with which he deploys it. * The Times Literary Supplement *
Fascinating detail . . . Milton is good at portraying eccentric characters and the Englishmen's shock at the periodic brutality of the Japanese. * The Times Literary Supplement *

Giles Milton is a writer and historian. He is the bestselling author of Nathaniel's Nutmeg, Big Chief Elizabeth, The Riddle and the Knight, White Gold, Samurai William, Paradise Lost and, most recently, Wolfram. He has also written two novels and two children's books, one of them illustrated by his wife Alexandra. He lives in South London.

GOR000359044
Samurai William: The Adventurer Who Unlocked Japan by Giles Milton
Giles Milton
Used - Very Good
Paperback
Hodder & Stoughton General Division
2003-02-03
416
0340794682
9780340794685
N/A
Book picture is for illustrative purposes only, actual binding, cover or edition may vary.
This is a used book - there is no escaping the fact it has been read by someone else and it will show signs of wear and previous use. Overall we expect it to be in very good condition, but if you are not entirely satisfied please get in touch with us.