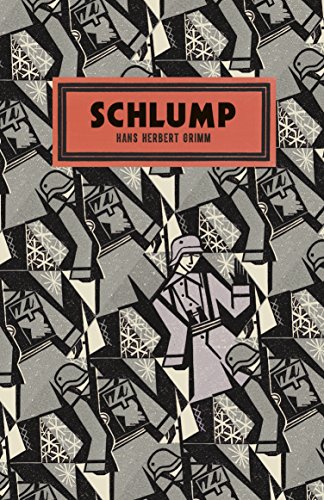 Used Price
£5.19
New RRP £9.99
Free Shipping in the UK
A GERMAN CLASSIC FROM A FORGOTTEN AUTHORSchlump is seventeen, a romantic, a chancer and a dreamer. But when he gets to the trenches, where death and mindless destruction are the everyday, he starts to understand something about war. Funny, brutal and charming, here's the First World War from the perspective of the inimitable Schlump.
Reviews:
Trustpilot
Very Good

A GERMAN CLASSIC FROM A FORGOTTEN AUTHOR Schlump is seventeen, a romantic, a chancer and a dreamer. It's 1915 so naturally he volunteers for war. In France he is assigned an administrative position in a small town and has a marvellous time. But when he gets to the trenches, where death and mindless destruction are the everyday, he starts to understand something about war. Funny, brutal and charming, here's the First World War from the perspective of the inimitable Schlump.

"A brutal, devastatingly honest story of the trenches that somehow retains its humour, and its poetry, to the end" * Independent, Best Books of 2015 *
"An unusual, original and charming addition to that great army of WWI novels" * The Times *
"A century after the Great War, Schlump reappears in Jamie Bulloch's excellent new translation and the extraordinary story of its rediscovery probably warrants a novel of its own...exceptional" * Independent *
"One of the great First World War novels, about a German soldier in a French village, who falls in love with it. It's full of criticism of how the war was conducted by Germany, so when Hitler came in, it was burnt." -- Michael Morpurgo * Daily Mail *
"The best of German war books so far" -- J. B. Priestley

Hans Herbert Grimm was born in 1896 in Vogtland. In 1928 he published his anti-war, semi-autobiographical novel Schlump anonymously in German. The following year it was published in English, in Britain and America. In 1933 the book was banned by the Nazis and Grimm became concerned with preserving the anonymity of his authorship. To avoid detection, he joined the Nazi party and worked as a language interpreter during the Second World War. On returning home to Soviet-occupied Germany he was no longer permitted to work as a teacher because of his involvement with the Nazis. In 1950 he was called to a meeting in Weimar by government officials - he never revealed what was discussed but two days later he committed suicide. Authorship of Schlump remained a mystery until 2013.

GOR007039773
Schlump by Hans Herbert Grimm
Hans Herbert Grimm
Used - Very Good
Paperback
Vintage Publishing
2015-05-07
288
0099595788
9780099595786
N/A
Book picture is for illustrative purposes only, actual binding, cover or edition may vary.
This is a used book - there is no escaping the fact it has been read by someone else and it will show signs of wear and previous use. Overall we expect it to be in very good condition, but if you are not entirely satisfied please get in touch with us.