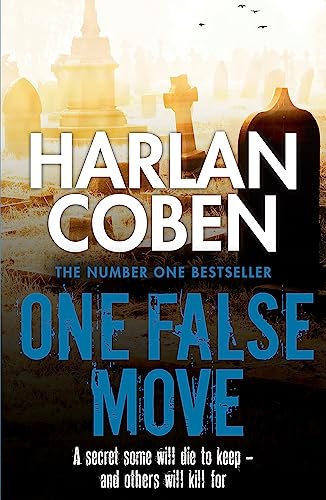 One False Move
by Harlan Coben

Used Price
£5.19
New RRP £8.99
Free Shipping in the UK
It should be a straightforward missing persons case... until the Mob are involved. An outstanding Myron Bolitar novel from the SUNDAY TIMES bestselling author of SIX YEARS.
Reviews:
Trustpilot
Like New Very Good Good

One False Move by Harlan Coben

It should be a straightforward missing persons case... until the Mob are involved. An outstanding Myron Bolitar novel from the SUNDAY TIMES bestselling author of SIX YEARS.

Myron Bolitar might have a slightly dubious past, but he knows how to handle himself and is doing just fine as a sports agent.

And then he meets Brenda Slaughter, one of the hottest female sports stars around. She's gorgeous, funny and single, and also seems to have mislaid her agent.

But when her father disappears, and the Mob starts leaning on her, it soon becomes apparent that potent forces are at work. And the more Myron tries to help, the closer he gets to losing his heart - and his life...

Harlan Coben specialises in rousing the snake that lurks in the perfectly cut grass of American suburbia ... Coben makes you care about them but never neglects a plot that is full of his trademark shocks * SUNDAY TELEGRAPH *

GOR010724726
One False Move by Harlan Coben
Harlan Coben
Used - Like New
Paperback
Orion Publishing Co
2014-04-21
368
1409150534
9781409150534
Winner of W H Smiths Fresh Talent 1998 (UK)
Book picture is for illustrative purposes only, actual binding, cover or edition may vary.
The book has been read, but looks new. The book cover has no visible wear, and the dust jacket is included if applicable. No missing or damaged pages, no tears, possible very minimal creasing, no underlining or highlighting of text, and no writing in the margins.