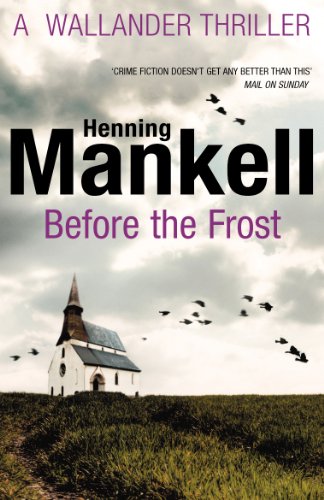 Before The Frost
by Henning Mankell

Used Price
£4.49
New RRP £8.99
Free Shipping in the UK
Meanwhile Linda Wallander, preparing to join the Ystad police force, arrives at the station. Showing all the hallmarks of her father - the maverick approach, the flaring temper - she becomes involved in the case and in the process is forced to confront a group of extremists bent on punishing the world's sinners.
Reviews:
Trustpilot
Very Good

Before The Frost Summary

Before The Frost by Henning Mankell

The leader of a religious cult in Guyana instigates a mass suicide. He succeeds in killing himself and his whole flock of worshippers, save one. In a wood outside Ystad, the police make an horrific discovery: a severed head, and hands locked together in an attitude of prayer. A Bible lies at the victim's side, handwritten corrections and amendments on every page. A string of incidents, including attacks on domestic animals, has been taking place and Inspector Wallander fears that these events could be the prelude to attacks on humans on a much greater scale. Meanwhile Linda Wallander, preparing to join the Ystad police force, arrives at the station. Showing all the hallmarks of her father - the maverick approach, the flaring temper - she becomes involved in the case and in the process is forced to confront a group of extremists bent on punishing the world's sinners.

Customer Reviews - Before The Frost

Before The Frost Reviews

"With this book his fans are in for a double treat as Mankell gives us two Wallanders for the price of one... Crime fiction doesn't get any better than this" * Mail on Sunday *
"Probably Britain's favourite European mystery writer... Mankell's subtle use of his characters keeps you reading" * Daily Mail *
"This novel will not disappoint Kurt's followers. He remains integral, and his guilt-shot relationship to his daughter is beautifully done" * Independent *
"The Nordic King of European thriller writers" -- Louise France * Observer *

GOR004591372
Before The Frost by Henning Mankell
Henning Mankell
Used - Very Good
Paperback
Vintage Publishing
2013-02-28
480
009957179X
9780099571797
N/A
Book picture is for illustrative purposes only, actual binding, cover or edition may vary.
This is a used book - there is no escaping the fact it has been read by someone else and it will show signs of wear and previous use. Overall we expect it to be in very good condition, but if you are not entirely satisfied please get in touch with us.