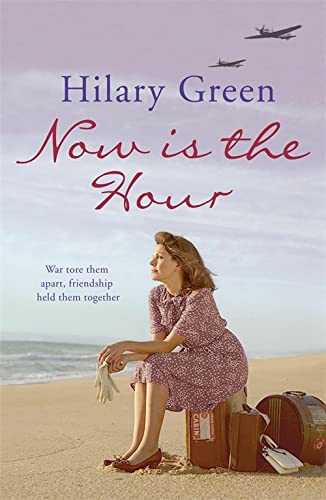 Now is the Hour
by Hilary Green

In Stock
£3.99
Glorious and moving World War II saga following the battles, loves and struggles of four performers who put aside their careers to do their bit in the war against Germany
Very Good
5 in stock

Now is the Hour Summary

Now is the Hour by Hilary Green

In an empty theatre at the end of the pier the cast of the Fairbourne Follies gathers round the radio to hear Neville Chamberlain declare war on Germany. Four firm friends are forced to part. Rose, the beautiful dancer, must return to her family in London and the blitz, leaving singer Richard to enlist in the army with their relationship still unresolved. Gay, asthmatic Merry, the musical director, is destined for the army too, while the object of his unrequited love, charismatic magician, Felix, chooses the RAF.

Before long, Rose joins a group entertaining the troops in France. The Nazi war machine however is fast and merciless on the land and in the air and soon all of them find themselves in terrible danger. And as they are struck by the brutality of war they realise exactly who is most important to them and despite the odds, and in terrible circumstances, they determine to find each other again.

With the threat of capture, injury and death ever present, the four of them will have to find reserves of courage, love and endurance that they did not know they possessed.

Now is the Hour Reviews

'A compelling story' * Publishing News on WE'LL MEET AGAIN *
'A gripping and touching novel.' * Good Book Guide on NEVER SAY GOODBYE *
'Green's book is a delightful and heady mix of romantic ingredients - spies, high-kicking dancers, forbidden love and friendship in the face of death. Who could ask for anything more?' * Lancashire Evening Post *
'An unforgettable saga of love and loss in wartime' * Good Book Guide *

Hilary Green is a trained actress and spent many years teaching drama and running a youth theatre company. She has also written scripts for the BBC Schools Radio History programmes and won the Kythira prize for a short story. Hilary now lives in the Wirral and is a full-time writer.

GOR000268959
Now is the Hour by Hilary Green
Hilary Green
Used - Very Good
Paperback
Hodder & Stoughton General Division
2007-04-05
336
0340898976
9780340898970
N/A
Book picture is for illustrative purposes only, actual binding, cover or edition may vary.
This is a used book - there is no escaping the fact it has been read by someone else and it will show signs of wear and previous use. Overall we expect it to be in very good condition, but if you are not entirely satisfied please get in touch with us.