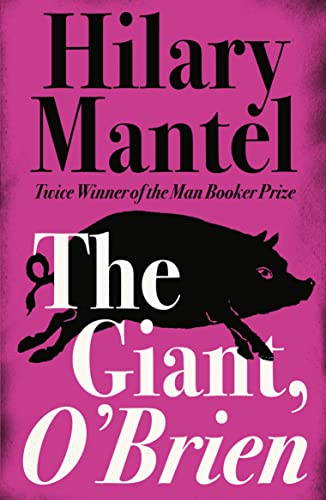 The Giant, O'Brien
by Hilary Mantel

From the two-time Man Booker winner, the story of the 18th Century Irish giant, Charles O'Brien.

The Giant, O'Brien by Hilary Mantel

From the two-time Man Booker winner, the story of the 18th Century Irish giant, Charles O'Brien.

Charles O'Brien, bard and giant. The cynical are moved by his flights of romance; the craven stirred by his tales of epic deeds. But what of his own story as he is led from Ireland to seek his fortune beyond the seas in England?

The Surprising Irish Giant may be the sensation of the season but only his compatriots seem to attend to his mythic powers of invention. John Hunter, celebrated surgeon and anatomist, buys dead men from the gallows and babies' corpses by the inch. Where is a man as unique as The Giant to hide his bones when he is yet alive?

The Giant, O' Brien is an unforgettable novel; lyrical, shocking and spliced with black comedy.

`[A] novel that magically creates an illusion of the Age of Enlightenment. Hilary Mantel puts the stink of the eighteenth century into our nostrils.' Independent

`A novelist of remarkable diversity...She writes about curiosity, companionship, art, love, death and eternity. She writes with wit, compassion and great elegance. Her books never fail to surprise, nor to delight: in this one she is at her very best - so far.' Independent on Sunday

`Mantel can out-write most writers of her generation, male and female. What she has done here is disturbing, grievous and extraordinary.' Maggie Gee, Sunday Times

'Filled with bizarre happenings, brazen images and characters whose earthiness you can smell.' TES

'Hilary Mantel has felt herself into the poetics of history with singular intensity.' New York Review

'Pathos and humour as they are elsewhere in the book are blended to perfection.' Sunday Telegraph

Hilary Mantel is the author of thirteen books , including A PLACE OF GREATER SAFETY, BEYOND BLACK, and the memoir GIVING UP THE GHOST. Her two most recent novels, WOLF HALL and its sequel BRING UP THE BODIES have both been awarded The Man Booker Prize - an unprecedented achievement.

GOR001008975
The Giant, O'Brien by Hilary Mantel
Hilary Mantel
Used - Very Good
Paperback
HarperCollins Publishers
1999-06-03
224
1857028864
9781857028867
N/A
Book picture is for illustrative purposes only, actual binding, cover or edition may vary.
This is a used book - there is no escaping the fact it has been read by someone else and it will show signs of wear and previous use. Overall we expect it to be in very good condition, but if you are not entirely satisfied please get in touch with us.