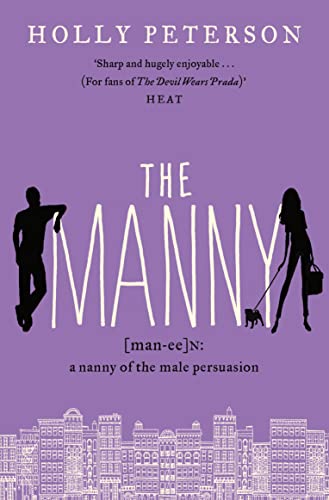 The Manny
by Holly Peterson

Sex and the City with a baby: the hot new Manhattan novel is a brilliantly entertaining romantic comedy about a harassed working mum who hires a male nanny.

The Manny by Holly Peterson

Sex and the City with a baby: the hot new Manhattan novel is a brilliantly entertaining romantic comedy about a harassed working mum who hires a male nanny.

Welcome to the Grid, home to New York's uber rich, where a manny - a male nanny - is the hottest new hire in town.

And Peter Bailey is young, fun and drop-dead gorgeous. He could be the answer to Jamie Whitfield's prayers, even if her husband disagrees.

Peter comes from a very different world to Jamie's. He's cool, calm and he sees right through her attempts to fit in with her chic and sleek neighbours.

Ditching high society dinners for dancing in Brooklyn, Jamie begins to wonder if a married uptown girl can fall for a downtown guy. He's good for her children. Could the manny be good for her too...?

`The Manny is a sharp and hugely enjoyable read. Fans of New Yorker must-bys The Devil Wears Prada and The Nanny Diaries should be rushing this one to the tills faster than SJP at a Manolo sample sale. ***** Heat

'Move over yummy mummies. The yummy manny is in town.' Spectator

`Money, Manners, Mannys: Holly Peterson's debut is a fabulously sharp skewering of the silly-rich in New York. I couldn't put it down. We should ALL get a Manny.' Plum Sykes, author of Bergdorf Blondes

After a decade as an Emmy-Award winning Producer for ABC News Primetime, Holly Peterson worked as Tina Brown's right-hand woman at Talk. As a contributing editor to Newsweek magazine, Holly acts as an in-house Producer and Story Editor. Holly and her husband now live in NYC, happily, with their three children.

GOR000546250
The Manny by Holly Peterson
Holly Peterson
Used - Very Good
Paperback
HarperCollins Publishers
2008-02-27
512
0007233035
9780007233038
N/A
Book picture is for illustrative purposes only, actual binding, cover or edition may vary.
This is a used book - there is no escaping the fact it has been read by someone else and it will show signs of wear and previous use. Overall we expect it to be in very good condition, but if you are not entirely satisfied please get in touch with us.