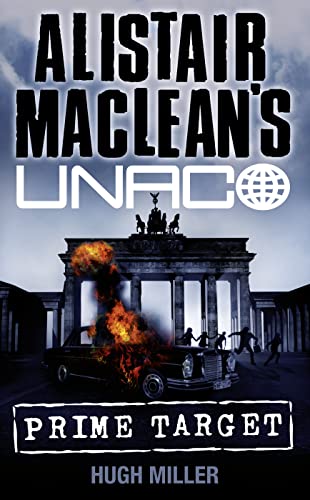 A US government official is assassinated, a list of names, all male, all German, is found and two men on the list are already dead. What is the connection? When the mission looks impossible, who do you call? UNACO.

A US government official is assassinated, a list of names, all male, all German, is found and two men on the list are already dead. What is the connection? When the mission looks impossible, who do you call? UNACO.

A young American government employee is murdered in cold blood on a London street. Her death is only the tip of a conspiracy that threatens the life of Andreas Wolff, the computer genius responsible for the security codes for ICON - the computerized criminal identification network. Malcolm Philpott, the enigmatic and powerful head of UNACO, recognizes the grave threat, and assigns his two best agents to the case.

Sabrina Carver and Mike Graham must race from New York to London, Morocco and Berlin in their efforts to crack the lethal intrigue that threatens world security and has its roots in the final days of World War Two and the desperate plans of a dying madman.

GOR001077571
Prime Target (Alistair MacLean's UNACO) by Hugh Miller
Hugh Miller
Alistair MacLean's UNACO
Used - Very Good
Paperback
HarperCollins Publishers
1997-10-06
352
0006499341
9780006499343
N/A
Book picture is for illustrative purposes only, actual binding, cover or edition may vary.
This is a used book - there is no escaping the fact it has been read by someone else and it will show signs of wear and previous use. Overall we expect it to be in very good condition, but if you are not entirely satisfied please get in touch with us.