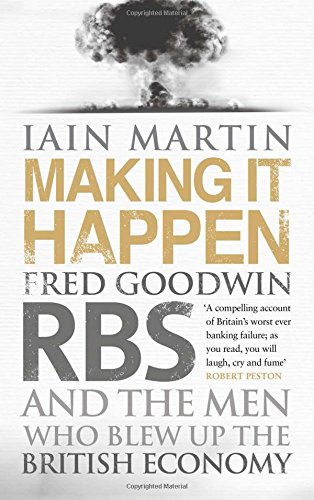 Making It Happen
by Iain Martin

Making It Happen: Fred Goodwin, RBS and the men who blew up the British economy by Iain Martin

When RBS collapsed and had to be bailed out by the taxpayer in the financial crisis of October 2008 it played a leading role in tipping Britain into its deepest economic downturn in seven decades. The economy shrank, bank lending froze, hundreds of thousands lost their jobs, living standards are still falling and Britons will be paying higher taxes for decades to pay the clean-up bill.

How on earth had a small Scottish bank grown so quickly to become a global financial giant that could do such immense damage when it collapsed?

At the centre of the story was Fred Goodwin, the former chief executive known as "Fred the Shred" who terrorised some of his staff and beguiled others. Not a banker by training, he nonetheless was given control of RBS and set about trying to make it one of the biggest brands in the world. It was said confidently that computerisation and new banking products had made the world safer. Only they hadn't...

Based on more than 80 interviews and with access to diaries and papers kept by those at the heart of the meltdown, this is the definitive account of the RBS disaster, a disaster which still casts such a shadow over our economy. In Making It Happen, senior executives, board members, Treasury insiders and regulators reveal how the bank's mania for expansion led it to take enormous risks its leaders didn't understand.

From the birth of the Royal Bank in 18th century Scotland, to the manic expansion under Fred Goodwin in the middle of a mad boom and culminating in the epoch-defining collapse, Making It Happen is the full, extraordinary story.

Iain Martin is a journalist and broadcaster. He comes from Paisley (as does Fred Goodwin). Iain was editor of The Scotsman newspaper from 2001-2004, and then its sister paper Scotland on Sunday from 2004-2006. In 2006 he moved to The Sunday Telegraph, where he was deputy editor. He has since been a columnist on politics for various newspapers: The Daily Telegraph and The Sunday Telegraph, the Wall Street Journal and the Daily Mail. He contributes to Financial News and Standpoint magazine. He has presented editions of Beyond Westminster, Week in Westminster and What the Papers Say for BBC Radio 4. He lives in London.

GOR010596799
Making It Happen: Fred Goodwin, RBS and the men who blew up the British economy by Iain Martin
Iain Martin
Used - Like New
Hardback
Simon & Schuster Ltd
2013-09-12
352
147111354X
9781471113543
Short-listed for Financial Times/Goldman Sachs Business Book of the Year Award 2013
Book picture is for illustrative purposes only, actual binding, cover or edition may vary.
The book has been read, but looks new. The book cover has no visible wear, and the dust jacket is included if applicable. No missing or damaged pages, no tears, possible very minimal creasing, no underlining or highlighting of text, and no writing in the margins.