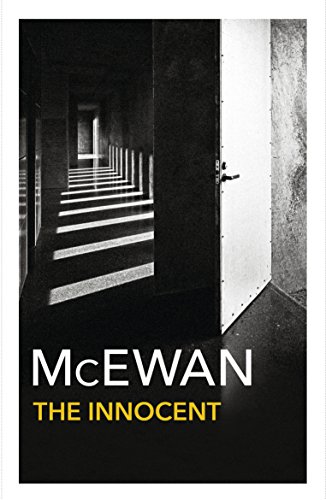 The Innocent
by Ian McEwan

In Stock
£3.59
The promise of his new life begins to be fulfilled as Leonard becomes a crucial part of the surveillance team, while simultaneously being initiated into a new world of love and sex by Maria, a beautiful young German woman.
Very Good Good
31 in stock

The Innocent by Ian McEwan

The Innocent is a startlingly prescient novel from Booker prize-winning Sunday Times bestselling author Ian McEwan. Into a Berlin wrenched between East and West, comes twenty-five-year-old Leonard Marnham, assigned to a British-American surveillance team. Though only a pawn in an international plot, Leonard uses his secret work to escape the bonds of his ordinary life. The promise of his new life begins to be fulfilled as Leonard becomes a crucial part of the surveillance team, while simultaneously being initiated into a new world of love and sex by Maria, a beautiful young German woman. It is a promise that turns to horror in the course of one terrible evening - a night when Leonard Marnham learns just how much of his innocence he's willing to shed. 'The plot crackles like thin ice with dread and suspense' Mail on Sunday

"The plot crackles like thin ice with dread and suspense" * Sunday Times *
"Powerful and disturbing...a tour de force" * New York Times *
"To call The Innocent a spy novel would be like calling Lord of the Flies a boy's adventure yarn...it ensure McEwan's major status" * Sunday Times *
"The sheer cleverness of the book is dazzling, and only fully to be appreciated as you turn the last page" * London Review of Books *
"Generous in scale, simple in its hideous impact... Ironically, he has celebrated the obsequies of the East-West spy thriller by writing one of the subtlest" * Mail on Sunday *

Ian McEwan is the critically acclaimed author of seventeen books. His first published work, a collection of short stories, First Love, Last Rites, won the Somerset Maugham Award. His novels include The Child in Time, which won the 1987 Whitbread Novel of the Year Award; The Cement Garden; Enduring Love; Amsterdam, which won the 1998 Booker Prize; Atonement; Saturday; On Chesil Beach; Solar; Sweet Tooth; The Children Act; and Nutshell, which was a Number One bestseller. Atonement and Enduring Love have both been turned into award-winning films, The Children Act and On Chesil Beach are in production and set for release this year, and filming is currently underway for a BBC TV adaptation of The Child in Time.

GOR001130930
The Innocent by Ian McEwan
Ian McEwan
Used - Very Good
Paperback
Vintage Publishing
1998-08-29
240
0099277093
9780099277095
N/A
Book picture is for illustrative purposes only, actual binding, cover or edition may vary.
This is a used book - there is no escaping the fact it has been read by someone else and it will show signs of wear and previous use. Overall we expect it to be in very good condition, but if you are not entirely satisfied please get in touch with us.