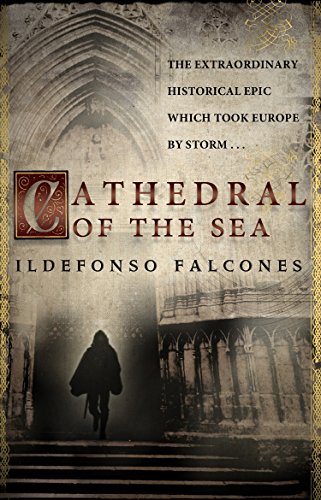 Cathedral of the Sea
by Ildefonso Falcones

In Stock
£23.99
A masterful eipc of love, war, treason, plague, famine, witchcraft, anti-Semitism and the Inquisition. Arnau's journey from slave to nobleman is the story of a struggle between good and evil that will turn Church against State and brother against brother ...
Very Good Good Well Read
Only 4 left

Cathedral of the Sea Summary

Cathedral of the Sea by Ildefonso Falcones

A masterful eipc of love, war, treason, plague, famine, witchcraft, anti-Semitism and the Inquisition. 14th-century Spain, the medieval city of Barcelona is enjoying a golden age of prosperity. Its humblest inhabitants are building, stone by stone, a magnificent church to overlook their harbour. This is the Cathedral of the Sea: a church to be built for the people by the people. In its shadow, Arnau, a young serf on the run from his feudal lord, struggles to earn his freedom. After famine, plague and thwarted love, Arnau's fortunes begin to turn when King Pedro makes him a baron as a reward for his courage in battle. But he is also forced to marry Eleonor, a ward of the King whom he does not love. His newfound status excites jealousy from his friends who plot his downfall with devastating consequences. Arnau's journey from slave to nobleman is the story of a struggle between good and evil that will turn Church against State and brother against brother ...

Cathedral of the Sea Reviews

"Sculpted and fluid... the international bestseller appears now in an impressively graceful translation which captures beautifully the archaic and lyrical tone of the narrative... Its beauty lies in its vivd exposition of the complexities of a bygone society" * Independent on Sunday *
"Falcones's intricately plotted novel rests on meticulous research... the ambitious yarn binds you into its thrall - a bold work of imagination, which pays homage to lives gone by as well as to the great church itself" * Daily Express *
"Turns on legal and financial manoeuvres rarely found in a historical novel. Passionate in explaning 14th century Barcelona, [Falcones] draws convincing pictures of its architecture and culture, right down to the basics such as the sewage stream... an exciting, very readable adventure novel, enriched by realistic descriptions of medieval life, work, finance and politics" * Independent *
"A powerful historical saga set in 14th century Barcelona that spans slavery, serfdom and anti-Semitism, friendship and thwarted love" * Choice (Book of the Month) *

Ildefonso Falcones' first novel, Cathedral of the Sea became a publishing legend with over a million copies sold in Spain alone. It has since been published in over forty countries, becoming a European bestseller. In The Hand of Fatima, Falcones marked the four hundredth anniversary of the expulsion of the Moors from 17th Century Spain. His latest novel THE BAREFOOT QUEEN has already sold over a million copies in Spain. It tells of the tumultuous birth of Flamenco in Spain. Falcones is a practising lawyer in Barcelona where he lives with his wife and four sons.

GOR001205676
Cathedral of the Sea by Ildefonso Falcones
Ildefonso Falcones
Used - Very Good
Paperback
Transworld Publishers Ltd
2009-03-26
752
0552773972
9780552773973
N/A
Book picture is for illustrative purposes only, actual binding, cover or edition may vary.
This is a used book - there is no escaping the fact it has been read by someone else and it will show signs of wear and previous use. Overall we expect it to be in very good condition, but if you are not entirely satisfied please get in touch with us.