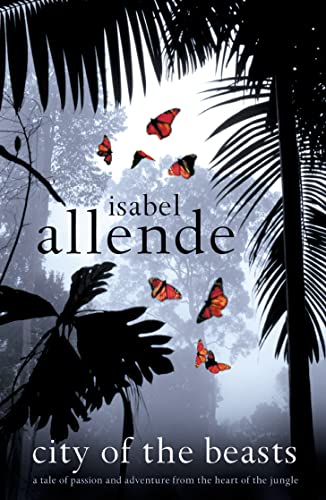 City of the Beasts
by Isabel Allende

An ecological romance with a pulsing heart, equal parts Rider Haggard and Chico Buarque - one of the world's greatest and most beloved storytellers broadens her style and reach with a Amazonian adventure story that will appeal to all ages.

City of the Beasts Summary

City of the Beasts by Isabel Allende

An ecological romance with a pulsing heart, equal parts Rider Haggard and Chico Buarque - one of the world's greatest and most beloved storytellers broadens her style and reach with a Amazonian adventure story that will appeal to all ages.

Fifteen-year-old Alexander Cold has the chance to take the trip of a lifetime.

With his mother in hospital, too ill to look after him, Alex is sent out to his grandmother Kate - a fearless reporter with blue eyes `as sharp as daggers' points'. Kate is about to embark on an expedition to the dangerous, remote world of the Amazon rainforest, but rather than change her plans, she simply takes Alex along with her. They set off with their team - including a local guide and his daughter Nadia, with her wild, curly hair and skin the colour of honey - in search of a fabled headhunting tribe and a legendary, marauding creature known to locals as the `Beast', only to find out much, much more about the mysteries of the jungle and its inhabitants.

In a novel rich in adventure, magic and spirit, internationally celebrated novelist Isabel Allende takes readers of all ages on a voyage of discovery and wonder, deep into the heart of the Amazon.

City of the Beasts Reviews

`Allende's writing is so vivid we hear the sounds, see the bright birds, smell and even taste the soft fruit.' The Times

`A wonderful, seemingly effortless storyteller; you feel yourself sink into the folds of her narrative with an almost childlike certainty that you're going to hear a good story well told.' Irish Independent

`Her prose is rich and magical, her characters vivid. She mixes violence and horror, love and humour, with more than a touch of genius.' Mary Wesley

GOR000380671
City of the Beasts by Isabel Allende
Isabel Allende
Used - Very Good
Paperback
HarperCollins Publishers
2003-05-24
416
000714637X
9780007146376
N/A
Book picture is for illustrative purposes only, actual binding, cover or edition may vary.
This is a used book - there is no escaping the fact it has been read by someone else and it will show signs of wear and previous use. Overall we expect it to be in very good condition, but if you are not entirely satisfied please get in touch with us.