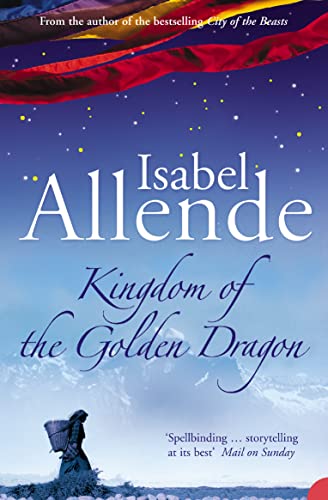 Kingdom of the Golden Dragon
by Isabel Allende

From one of the world's best-loved storytellers comes a magical novel of adventure and discovery - the sequel to Isabel Allende's bestselling City of the Beasts.

Kingdom of the Golden Dragon Summary

Kingdom of the Golden Dragon by Isabel Allende

From one of the world's best-loved storytellers comes a magical novel of adventure and discovery - the sequel to Isabel Allende's bestselling City of the Beasts.

Fifteen-year-old Alex Cold, his friend Nadia and his eccentric grandmother Kate embark on a journey to a mysterious, hidden land high in the Himalayas. There they find that the peaceful, spiritual lifestyle of the Forbidden Kingdom, which has remained unchanged for generations, is under threat. 'The Collector', a rich westerner, is plotting to steal the Golden Dragon, a valuable statue that can foretell the future...

Full of the imagination and wonder that has made Isabel Allende one of the world's bestselling authors, The Kingdom of the Golden Dragon is an enthralling work of fiction that will delight the thousands of readers of all ages who bought and loved City of the Beasts.

Kingdom of the Golden Dragon Reviews

'This spellbinding novel, like its predecessor, is storytelling at its best' Mail on Sunday

'City of the Beasts is the kind of accomplishment to show readers that there's more to life than Harry Potter.' Literary Review

GOR000409807
Kingdom of the Golden Dragon by Isabel Allende
Isabel Allende
Used - Very Good
Paperback
HarperCollins Publishers
2005-02-01
464
0007177488
9780007177486
N/A
Book picture is for illustrative purposes only, actual binding, cover or edition may vary.
This is a used book - there is no escaping the fact it has been read by someone else and it will show signs of wear and previous use. Overall we expect it to be in very good condition, but if you are not entirely satisfied please get in touch with us.