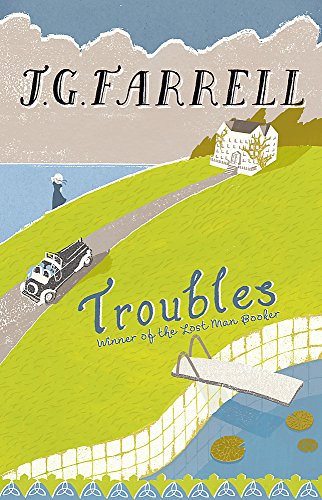 Major Brendan Archer travels to Ireland - to the Majestic Hotel and to the fiancee he acquired on a rash afternoon's leave three years ago. Despite her many letters, the lady herself proves elusive, and the Major's engagement is short-lived. But he is unable to detach himself from the alluring discomforts of the crumbling hotel. Ensconced in the dim and shabby splendour of the Palm Court, surrounded by gently decaying old ladies and proliferating cats, the Major passes the summer. So hypnotic are the faded charms of the Majestic, the Major is almost unaware of the gathering storm. But this is Ireland in 1919 - and the struggle for independence is about to explode with brutal force.

It's funny, sad and beautifully written; it's prescient, wise, original and unexpectedly eccentric. Vote JG, I say. Or even better, just read him. -- Rachel Cooke * OBSERVER *
Troubles has everything: great story, compelling characters, believable dialogue and big ideas. It's a book good enough to win the Booker in any year. Not just 1970. -- John Crace * GUARDIAN *
Like Fawlty Towers written by Evelyn Waugh -- Rachel Cooke * Sunday Times Oxford Literary Festival, 2010 *
'I can't praise this book enough. It's a good rule that reviewers should be forbidden from using the word "genius"...But it's hard to know what else to say when faced with a book like Troubles. There's no avoiding it. JG Farrell was a genius.' -- Sam Jordison * GUARDIAN BOOKS BLOG *
No finer work has ever been written about this transitional period in Irish history: it remains a landmark in 20th-century Irish literature, and one that deserves to win The One And Only Great Retrospective Booker. -- Kevin Myers * IRISH INDEPENDENT *
Troubles stands up at every stage. It has a fine beginning and a brilliant ending, and is sustained throughout by this wit, laughter and intelligence. -- Tobias HIll * INDEPENDENT *
meaty and magnificent?He [Farrell] is a master at controlling pace, and his writing is satisfyingly solid. He is capable of the most vigorous farce, and then he will bring things to the knife edge of tragedy?a fine and fitting winner. -- Philip Womack * DAILY TELEGRAPH *
Poignant, meticulously observed, often hilarious, it is one of the finest novels of the past 50 years. -- Simon Shaw * MAIL ON SUNDAY *

J.G. Farrell was born in Liverpool in 1935 and spent a good deal of his life abroad, including periods in France and North America, and then settled in London where he wrote most of his novels. In April 1979 he went to live in County Cork where only four months later he was drowned in a fishing accident.

GOR001447839
Troubles by J.G. Farrell
J.G. Farrell
Used - Very Good
Paperback
Orion Publishing Co
1993-08-05
480
1857990188
9781857990188
Winner of Geoffrey Faber Memorial Prize 1971 Winner of Lost Man Booker Prize 1970/2010
Book picture is for illustrative purposes only, actual binding, cover or edition may vary.
This is a used book - there is no escaping the fact it has been read by someone else and it will show signs of wear and previous use. Overall we expect it to be in very good condition, but if you are not entirely satisfied please get in touch with us.