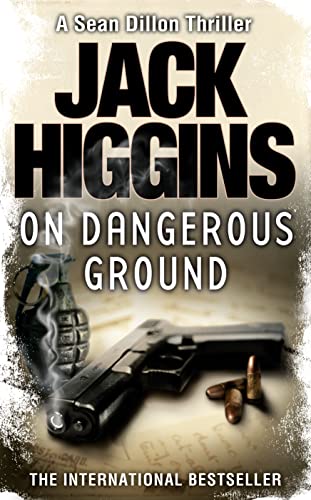 On Dangerous Ground
by Jack Higgins

A clandestine treaty. A death-bed confession. And the hunt is on for Sean Dillon, who must go head to head with the Mafia.

A clandestine treaty. A death-bed confession. And the hunt is on for Sean Dillon, who must go head to head with the Mafia.

The year is 1944. Just outside Delhi a British Dakota crashes, taking lives and destroying a clandestine treaty signed by Lord Mountbatten and the Communist leader, Mao Tse-tung. An historic agreement, one set to change the course of history.

Over thirty years later, a death-bed confession from a Mafia kingpin reveals the answers to untouched secrets about the treaty, and just how much the British and Chinese governments would pay for its destruction.

It's not long before Sean Dillon enters the fray; his feared expertise tested as he goes up against the uncompromising violence of the Mafia and the enticing dangers of a beautiful woman, more deadly than any professional killer he has ever known.

Battling ruthless killers and the higher unseen powers of the government, Dillon must expose treacheries, colossal truths, and risk everything he loves in an explosive and thrilling quest for justice.

`A splendid Boy's Own-style adventure... in the tradition of Alistair MacLean'
Daily Express

Jack Higgins was a soldier and then a teacher before becoming a full-time writer. `The Eagle Has Landed' turned him into an international bestselling author and his novels have since sold over 250 million copies and been translated into sixty languages. Many of them have also been made into successful films

GOR002659575
On Dangerous Ground (Sean Dillon Series, Book 3) by Jack Higgins
Jack Higgins
Sean Dillon Series
Used - Very Good
Paperback
HarperCollins Publishers
2011-01-06
384
0007304528
9780007304523
N/A
Book picture is for illustrative purposes only, actual binding, cover or edition may vary.
This is a used book - there is no escaping the fact it has been read by someone else and it will show signs of wear and previous use. Overall we expect it to be in very good condition, but if you are not entirely satisfied please get in touch with us.