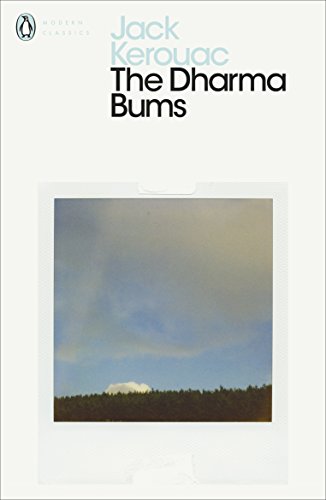 The Dharma Bums
by Jack Kerouac

Used Price
£6.79
New RRP £9.99
Free Shipping in the UK
Follows two young men engaged in a passionate search for dharma or truth. Their major adventure is the pursuit of the Zen way, which takes them climbing into the high sierras to seek the lesson of solitude.
Reviews:
Trustpilot
Very Good Good Well Read

The Dharma Bums by Jack Kerouac

A witty, moving philosophical novel, Jack Kerouac's The Dharma Bums is a journey of self-discovery through the lens of Zen Buddhist thought. This Penguin Modern Classics edition includes an introduction by Ann Douglas.

Following the explosive energy of On the Road, the book that put the Beat Genration on the literary map - and Jack Kerouac on the bestseller list - comes The Dharma Bums, in which Kerouac charts the spiritual quest of a group of friends in search of Dharma, or Truth. Ray Smith and his friend Japhy, along with Morley the yodeller, head off into the high Sierras to seek the lesson of solitude and experience the Zen way of life. But in wildly Bohemian San Francisco, with its poetry jam sessions, marathon drinking bouts and experiments in 'yabyum', they find the ascetic route distinctly hard to follow.

Jack Kerouac (1922-69) was an American novelist, poet, artist and part of the Beat Generation. His first published novel, The Town and the City, appeared in 1950, but it was On the Road, published in 1957, that made Kerouac famous. Publication of his many other books followed, among them The Subterraneans, Big Sur, and The Dharma Bums. Kerouac died in Florida at the age of forty-seven.

If you enjoyed The Dharma Bums, you might like Kerouac's On the Road, also available in Penguin Classics.

'A vivid evocation of part of our time'
New York Post

Jack Kerouac wrote a number of hugely influential and popular novels. He is remembered as one of the key figures of the legendary Beat generation. As much as anything, he came to represent a philosophy, a way of life.

Ann Douglas is Professor of Comparative Literature at Columbia University. She has published numerous essays, articles and book reviews on American culture in papers and periodicals such as The New York Times, The Nation and Slate, and introductions for Little Women, Uncle Tom's Cabin and The Subterraneans among others. Prof. Douglas teaches twentieth-century American literature, film, music, and politics, with an emphasis on the Cold War era, African-American culture, and post-colonial approaches. She is currently at work on a book, Noir Nation: Cold War U.S. Culture 1945-1960.

GOR001625484
The Dharma Bums by Jack Kerouac
Jack Kerouac
Penguin Modern Classics
Used - Very Good
Paperback
Penguin Books Ltd
2000-08-03
240
0141184884
9780141184883
N/A
Book picture is for illustrative purposes only, actual binding, cover or edition may vary.
This is a used book - there is no escaping the fact it has been read by someone else and it will show signs of wear and previous use. Overall we expect it to be in very good condition, but if you are not entirely satisfied please get in touch with us.