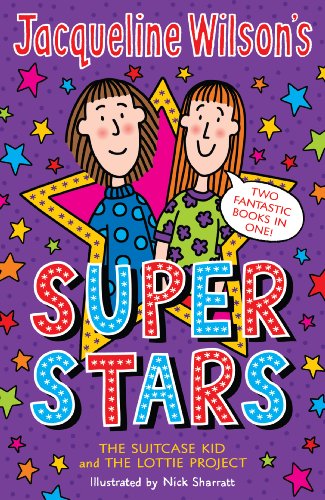 In Stock
£3.99
But all she wants is to go back to how things were before . . .Winner of the Children's Book AwardIn THE LOTTIE PROJECT, Charlie invents a Victorian servant girl as part of her school project. Lottie's life was very hard, but the two might have more in common that Charlie realised . . .
Very Good Good
5 in stock

Two of Jacqueline Wilson's most popular stories together in one fantastic collection. In THE SUITCASE KID, Andy is struggling to cope with her parents' divorce: one week with Mum, one week with Dad. But all she wants is to go back to how things were before . . . Winner of the Children's Book Award In THE LOTTIE PROJECT, Charlie invents a Victorian servant girl as part of her school project. Lottie's life was very hard, but the two might have more in common that Charlie realised . . .

"The trick of writing as a child is not easy to pull off, but Wilson does it triumphantly" * Independent on Sunday on THE SUITCASE KID *
"Honest, angry, sometimes sad and always very readable. There is also a near-happy ending, which is both moving and for the most part credible. Adults could learn something here about the emotional turmoil suffered by a child with divided loyalties" * TES on THE SUITCASE KID *
"Even the most resistant page-turner would find this difficult to put down" * The Sunday Times on THE LOTTIE PROJECT *

GOR000380767
Jacqueline Wilson's Superstars by Jacqueline Wilson
Jacqueline Wilson
Used - Very Good
Paperback
Random House Children's Publishers UK
2000-11-02
368
0440864550
9780440864554
N/A
Book picture is for illustrative purposes only, actual binding, cover or edition may vary.
This is a used book - there is no escaping the fact it has been read by someone else and it will show signs of wear and previous use. Overall we expect it to be in very good condition, but if you are not entirely satisfied please get in touch with us.