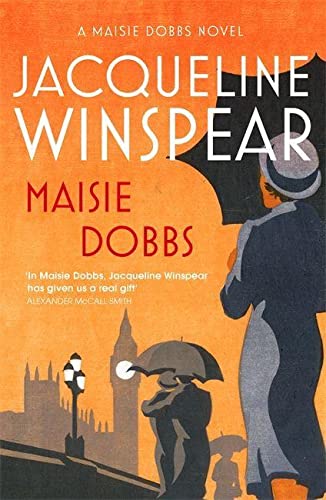 Fiercely independent Maisie Dobbs has recently set herself up as a private detective. Such a move may not seem especially startling. But this is 1929, and Maisie is exceptional in many ways.

Having started as a maid to the London aristocracy, studied her way to Cambridge and served as a nurse in the Great War, Maisie has wisdom, experience and understanding beyond her years. Little does she realise the extent to which this strength of character is soon to be tested. For her first case forces her to uncover secrets long buried, and to confront ghosts from her own past . . .

'In Maisie Dobbs, Jacqueline Winspear has given us a real gift' Alexander McCall Smith

Sue Baker's 'Quarterly Highlights' * Publishing News *
'In Maisie Dobbs, Jacqueline Winspear has given us a real gift. Maisie Dobbs has not been created - she has been discovered. Such people are always there amongst us, waiting for somebody like Ms. Winspear to come along and reveal them. And what a revelation it is!' * Alexander McCall Smith *
It's a long time since I've read a crime novel that begins as well as Jacqueline Winspear's Maisie Dobbs ... well written ... [Jacqueline Winspear] is set fair for a very bright future as a crime novelist. * Simon Brett, Daily Mail *
Feisty, working-class heroine Maisie is a deliberate throwback to the sleuthettes of old-fashioned crime writing and will appeal to all those fans who pine for uncomplicated characters and a strong demarcation between good and bad. The well-plotted story, its characters and the picture of London between the wars are decidedly romantic. American readers loved it; many Brits will, too. * The Guardian *
Maisie Dobbs is a welcome and unusual addition to the crowded world of literary detectives ... A very readable whodunnit * Sainsbury's Magazine *
Jacqueline Winspear's Maisie Dobbs is a welcome addition to the sleuthing scene. Simultaneously self-reliant and vulnerable, Maisie isn't a character I'll easily forget * Elizabeth George *
Much more than just another detective story... thought-provoking * Newbooksmag *
Readers sensing a story-within-a-story won't be disappointed. But first, they must prepare to be astonished at the sensitivity and wisdom with which Maisie resolves her first professional assignment * New York Times *
A wry and immensely readable beginning to what promises to be a vivid new addition to crime fiction * Mail on Sunday *
Even if detective stories aren't your thing, you'll love Maisie Dobbs * New Woman *
The book is much more than a cosy mystery - it is also about women's growing emancipation and the profound changes to society after the First World War. * Mail on Sunday's You *

Jacqueline Winspear is the creator of the New York Times and National Bestselling series featuring psychologist and investigator, Maisie Dobbs. Her first novel - Maisie Dobbs - received numerous award nominations, including the Edgar Award for Best Novel and the Agatha Award for Best First Novel. It was a New York Times Notable Book and a Publisher's Weekly Top Ten Pick. Since that time, Jacqueline's work has received many award nominations, and she has received the Agatha Award twice, the Macavity Award, the Alex Award, the Sue Feder Award for Best Historical Novel and the Bruce Alexander Award for Best Historical novel. Her 'standalone' novel set in WW1, The Care and Management of Lies, was a finalist for the Dayton Literary Peace Prize in 2015.

GOR001077731
Maisie Dobbs: Maisie Dobbs Mystery 1 by Jacqueline Winspear
Jacqueline Winspear
Used - Very Good
Paperback
Hodder & Stoughton General Division
2005-02-07
320
0719566223
9780719566226
N/A
Book picture is for illustrative purposes only, actual binding, cover or edition may vary.
This is a used book - there is no escaping the fact it has been read by someone else and it will show signs of wear and previous use. Overall we expect it to be in very good condition, but if you are not entirely satisfied please get in touch with us.