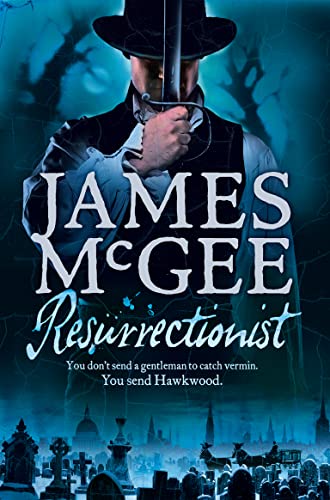 Hawkwood, the Regency James Bond, returns in this gripping, action packed sequel to the bestselling `Ratcatcher'.

Hawkwood, the Regency James Bond, returns in this gripping, action packed sequel to the bestselling `Ratcatcher'.

Matthew Hawkwood. Soldier, spy, lover - a man as dangerous as the criminals he hunts.

The tough Bow Street Runner is back where he's not wanted, in the most forbidding places London has to offer: its graveyards and the rank, sinister halls of Bedlam, the country's most notorious lunatic asylum.

There are missing bodies all around - dead and alive. 'Resurrection men' serve the demands of the city's surgeons by stealing corpses - and creating a few of their own along the way.

Far more worrying is the escape from Bedlam of a very unusual inmate: one Colonel Titus Xavier Hyde, an obsessive, gifted surgeon whose insanity is only matched by his dark intelligence. And this twisted genius has a point to prove. Which will mean plenty more work for the gravediggers...

`Fascinating... with quickly paced action and many a twist and turn, McGee draws the plot's threads skilfully together... thoughtful, colourful and very readable' Historical Novels Review

`"Ratcatcher" marks the start of a series that will run and run... and run!' Reginald Hill

James McGee is the pseudonym of Glen Moy, the Ottakar's manager in Tenterden. Glen has worked in banking, sales, newspapers and the airline industry before bookselling. His interest in the Napoleonic period dates to his first reading of C.S.Forrester's 'The Gun'. 'Resurrectionist' is the second in a series of books featuring Matthew Hawkwood.

GOR000901456
Resurrectionist by James McGee
James McGee
Used - Very Good
Paperback
HarperCollins Publishers
2007-09-03
400
0007212712
9780007212712
N/A
Book picture is for illustrative purposes only, actual binding, cover or edition may vary.
This is a used book - there is no escaping the fact it has been read by someone else and it will show signs of wear and previous use. Overall we expect it to be in very good condition, but if you are not entirely satisfied please get in touch with us.