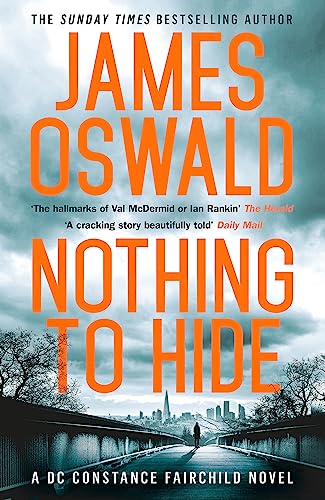 Nothing to Hide
by James Oswald

Used Price
£3.59
New RRP £7.99
Free Shipping in the UK
From one of the UK's biggest crime writers - the man who brought you the bestselling Inspector McLean novels - comes the second book in his Constance Fairchild series, NOTHING TO HIDE
Very Good Good Well Read

Nothing to Hide Summary

Nothing to Hide by James Oswald

The new book in the brilliant Constance Fairchild series, from one of Scotland's foremost crime writers.

'OSWALD'S WRITING IS A CLASS ABOVE' Express

Suspended from duty after her last case ended in the high-profile arrest of one of Britain's wealthiest men, DC Constance Fairchild is trying to stay away from the limelight. Fate has other ideas . . .

Coming home to her London flat, Constance stumbles across a young man, bloodied, mutilated and barely alive. She calls it in and is quickly thrown into the middle of a nationwide investigation . . . It seems that the victim is just the latest in a string of similar ritualistic attacks.

No matter that she is off-duty, no matter that there are those in the Met who would gladly see the back of her, Con can't shake her innate determination to bring the monsters responsible for this brutality to justice.

Trouble always seems to find her, and even if she has nothing to hide, perhaps she has everything to lose . . .

Nothing to Hide Reviews

James Oswald is the author of the Sunday Times bestselling Inspector McLean series of detective mysteries, as well as the new DC Constance Fairchild series. James's first two books, NATURAL CAUSES and THE BOOK OF SOULS, were both short-listed for the prestigious CWA Debut Dagger Award. BURY THEM DEEP is the tenth book in the Inspector Mclean Series. James farms Highland cows and Romney sheep by day, writes disturbing fiction by night.

GOR010159740
Nothing to Hide by James Oswald
James Oswald
The Constance Fairchild Series
Used - Very Good
Paperback
Headline Publishing Group
2019-11-12
352
1472250052
9781472250056
N/A
Book picture is for illustrative purposes only, actual binding, cover or edition may vary.
This is a used book - there is no escaping the fact it has been read by someone else and it will show signs of wear and previous use. Overall we expect it to be in very good condition, but if you are not entirely satisfied please get in touch with us.