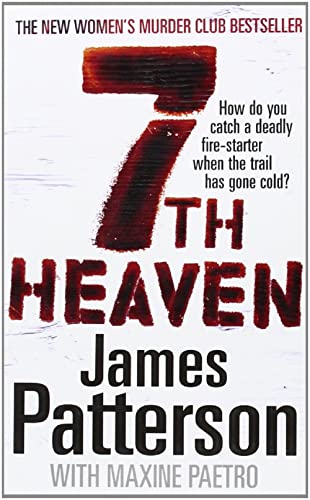 In Stock
£3.99
Claire, a medical examiner trying to balance her career and her pregnancy and Cindy, crime reporter for the San Francisco Chronicle - Lindsay must race to find the suspects and stop the cold-blooded killers, fast.
Very Good Good
12 in stock

The bestselling 7th novel in the Women's Murder Club series THE HEAT IS ON Detective Lindsay Boxer and the Women's Murder Club are at breaking point. San Francisco's wealthiest citizens are being targeted in lethal arson attacks. But Lindsay's investigation is complicated by the news that the governor's popular son, who mysteriously vanished long ago, may have resurfaced. Under immense political pressure to crack both cases, Lindsay starts to wonder if they're connected...

"Fast-moving, intricately plotted story in which Boxer steals the show as the tough cop with a good heart" * The Mirror *
"The suspense is kept high until the final pages. 7th Heaven is written in a brisk and clear style . . . I enjoy a good plot and this one qualifies in that category . . . the bottom line is that I really enjoyed it and would certainly read more of the series and rather regret not having read the earlier ones" * eurocrime.co.uk *
"Another giant of popular fiction to arrive in the shops in January will be James Patterson with 7th Heaven...As with all Patterson novels, expect lots of clever links in the breakneck plot" * Cork Evening Echo *
"The seventh in the popular Woman's Murder Club series, this crime drama races along in short, action-packed chapters" * My Weekly *
"I stayed up so late finishing it I got a migraine. But it was worth it!" * York Evening Press *

GOR001043037
7th Heaven: (Women's Murder Club 7) by James Patterson
James Patterson
Women's Murder Club
Used - Very Good
Paperback
Cornerstone
2008-12-01
496
0099514540
9780099514541
N/A
Book picture is for illustrative purposes only, actual binding, cover or edition may vary.
This is a used book - there is no escaping the fact it has been read by someone else and it will show signs of wear and previous use. Overall we expect it to be in very good condition, but if you are not entirely satisfied please get in touch with us.