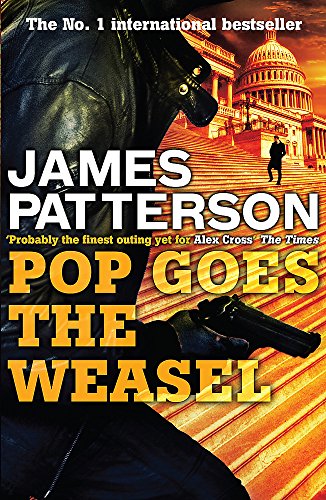 In POP GOES THE WEASEL, James Patterson has created a formidable villain every reader will see in the shadows when the lights are out, a tender love story, a plot powered by relentless suspense and psychological thrills kicked up to an all-time high.

'It's all just a game, darling. I play with three other men. Their names are FAMINE, WAR and CONQUEROR. My name is DEATH. You're a very lucky girl - I'm the best player of all.'

Geoffrey Shafter: a man who never loses, he is prepared to play the game of games for the highest stakes of all.

Alex Cross: senior Washington, DC homicide detective, he is determined, whatever the consequences, to unmask the man he has nicknamed the weasel, the prime suspect for a spate of killings that Cross has been forbidden to investigate.

James Patterson is one of the best-known and biggest-selling writers of all time. Since winning the Edgar (TM) Award for Best First Novel with The Thomas Berryman Number, his books have sold in excess of 300 million copies worldwide and he has been the most borrowed author in UK libraries for the past eight years in a row. He is the author of some of the most popular series of the past two decades - the Alex Cross, Women's Murder Club, Detective Michael Bennett and Private novels - and he has written many other number one bestsellers including romance novels and stand-alone thrillers. He lives in Florida with his wife and son.

GOR001450497
Pop Goes the Weasel by James Patterson
James Patterson
Alex Cross
Used - Very Good
Paperback
Headline Publishing Group
2009-10-15
512
0755349334
9780755349333
N/A
Book picture is for illustrative purposes only, actual binding, cover or edition may vary.
This is a used book - there is no escaping the fact it has been read by someone else and it will show signs of wear and previous use. Overall we expect it to be in very good condition, but if you are not entirely satisfied please get in touch with us.