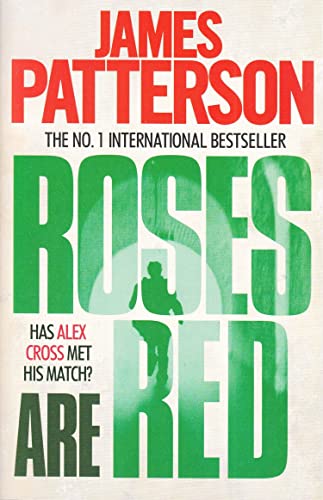 Roses are Red
by James Patterson

Roses are Red by James Patterson

A series of meticulously planned bank robberies ends in murder, and detective Alex Cross must pit his wits against the bizarre and sadistic mastermind behind the crimes.

Although torn between dedication to his job and commitment to his family, Cross cannot ignore the case, despite the risks he knows will come with hunting down a killer - and the heartbreaking cost.

James Patterson's bestseller takes us from deep inside the crazy world of a psychopath's masquerade right to the heart of fiction's most brilliant detective, Alex Cross, in an explosive tale where mind games lead to violence and the slightest mistake will be punished with death.

'If there really were human superheroes, Alex Cross would be at the head of the class...and, with each instalment in the series, Patterson makes sure his superhero gets bigger and better while at the same time becomming more vulnerable.' * New York Times *
'Patterson knows where our deepest fears are buried... There's no stopping his imagination.' * New York Times Book Review *

James Patterson is one of the best-known and biggest-selling writers of all time. Since winning the Edgar (TM) Award for Best First Novel with The Thomas Berryman Number, his books have sold in excess of 300 million copies worldwide and he has been the most borrowed author in UK libraries for the past eight years in a row. He is the author of some of the most popular series of the past two decades - the Alex Cross, Women's Murder Club, Detective Michael Bennett and Private novels - and he has written many other number one bestsellers including romance novels and stand-alone thrillers. He lives in Florida with his wife and son. James is passionate about encouraging children to read. Inspired by his own son who was a reluctant reader, he also writes a range of books specifically for young readers. James is a founding partner of Booktrust's Children's Reading Fund in the UK.

GOR002086866
Roses are Red by James Patterson
James Patterson
Alex Cross
Used - Very Good
Paperback
Headline Publishing Group
2009-11-01
448
0755349342
9780755349340
N/A
Book picture is for illustrative purposes only, actual binding, cover or edition may vary.
The book has been read but remains in clean condition. All pages are intact and the cover is intact. Some minor wear to the spine.