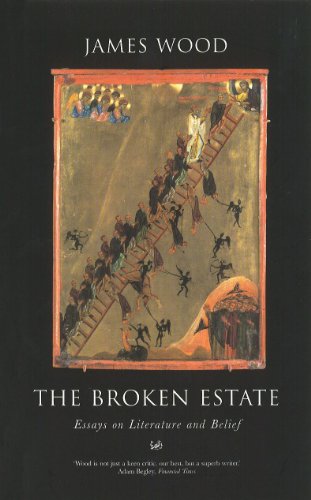 The Broken Estate
by James Wood

In Stock
£8.49
In a series of long essays, James Wood examines the connection between literature and religious belief, in a startlingly wide group of writers.
Very Good
Only 3 left

The Broken Estate: Essays on Literature and Belief by James Wood

In a series of long essays, James Wood examines the connection between literature and religious belief, in a startlingly wide group of writers. Wood re-appraises the writing of such figures as Thomas More, Jane Austen, Herman Melville, Anton Chekhov, Thomas Mann, Nikolai Gogol, Gustave Flaubert and Virginia Woolf, vigorously reading them against the grain of received opinion, and illuminatingly relating them to questions of religious and phiosophical belief. Contemporary writers, such as Martin Amis, Thomas Pynchon and George Steiner, are also discussed, with the boldness and attention to language that have made Wood such an influential and controversial figure. Writing here about his own childhood struggle to believe, Wood says that 'the child of evangelism, if he does not believe, inherits nevertheless a suspicion of indifference'. Wood brings that suspicion to bear on literature itself. The result is a unique book of criticism.

"Wood is not just a keen critic, our best, but a superb writer" -- Adam Begley * Financial Times *
"A close reader of genius... Illuminating and exciting and compelling... one never doubts the soundness of his judgements... There is wonderful writing throughout this collection, by turns luscious and muscular, committed and disdaining, passionate and minutely considered" -- John Banville * Irish Times *
"He is one of literature's true lovers, and his deeply felt, contentious essays are thrilling in their reach and moral seriousness" -- Susan Sontag
"Magnificent... Like all good critics, he is a story-teller of the art of reading, recreating the experience on the page for us" -- Evening Standard * Francis Spufford *
"We have very few critics who can vie with Jarrell and Toynbee, who can remind us that talking about literature is a part of what literature is about, and talking about it with passion, precision, and out of a rich store of reading is a rare and precious gift: it is good for all of us that James Wood has it and we have James Wood" -- Gabriel Josipovici * Times Literary Supplement *

James Wood has been a staff writer at the New Yorker since 2007. In 2009, he won the National Magazine Award for reviews and criticism. He was the chief literary critic at the Guardian from 1992 to 1995, and a book critic at the New Republic from 1995 to 2007. He has published a number of books with Cape, including How Fiction Works, which has been translated into thirteen languages.

GOR005047809
The Broken Estate: Essays on Literature and Belief by James Wood
James Wood
Used - Very Good
Paperback
Vintage Publishing
2000-03-02
336
0712665579
9780712665575
N/A
Book picture is for illustrative purposes only, actual binding, cover or edition may vary.
This is a used book - there is no escaping the fact it has been read by someone else and it will show signs of wear and previous use. Overall we expect it to be in very good condition, but if you are not entirely satisfied please get in touch with us.