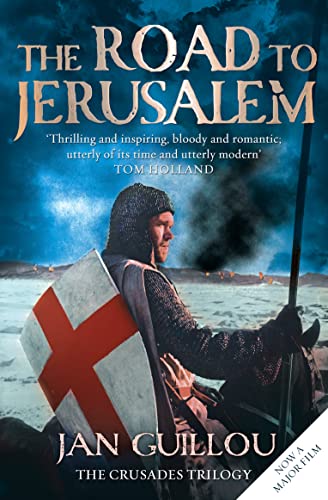 The Road to Jerusalem
by Jan Guillou

The epic story of one man's fight for his love, his God and his country

The Road to Jerusalem Summary

The Road to Jerusalem by Jan Guillou

The epic story of one man's fight for his love, his God and his country

The Road to Jerusalem - Book 1 in the Crusades Trilogy.

Arn Magnusson, born into an aristocratic Swedish family, is raised in an old monastery because of an old promise made by his mother. From the start he shows the natural skill and aptitude of a born fighter, yet despite his strength he is innocent in the ways of the world. He is sent from the sheltered walls of the convent to experience something of real life. On his journeys Arn falls foul of various fighting groups, but is also delighted with the women he encounters. Seduced by one sister, he falls in love with the other and ends up sleeping with them both - a mortal sin in the medieval church. While his love is sent to a convent, Arn's sentence is commuted to forced commitment to the cause of the Crusades, where he becomes a notable soldier and eventually a high ranking commander of the Knights Templar and both friend and enemy to the charismatic Saladin.

Arn's Story continues in the next two books: The Knight Templar and Kingdom at the End of the Road.

The Road to Jerusalem Reviews

`He has a remarkable grasp of the mindset of the period and always puts the emphasis where it would be for the people involved at hat time, rather than ours. Some readers may find that disorienting, but a capacity for disturbing readers' assumptions is even more a hallmark of good historical fiction than the inclusion of the Knights Templar'
Diana Gabaldon

'Thrilling and inspiring, bloody and romantic; utterly of its time and utterly modern'
Tom Holland

'Destined to become a classic, a brilliant and dramatic recreation of the medieval world' Sharon Penman

Jan Oscar Sverre Lucien Henri Guillou was born in Sweden in January 1944. He made his name as a journalist and rose to fame when he exposed a secret intelligence organisation, was convicted of espionage and spent 10 months in prison, 5 of which were spent in solitary confinement. He is now a bestselling novelist and writes regularly for Sweden's leading tabloid, commenting on current affaris.

GOR001193692
The Road to Jerusalem by Jan Guillou
Jan Guillou
Used - Very Good
Paperback
HarperCollins Publishers
2009-01-05
400
000728585X
9780007285853
N/A
Book picture is for illustrative purposes only, actual binding, cover or edition may vary.
This is a used book - there is no escaping the fact it has been read by someone else and it will show signs of wear and previous use. Overall we expect it to be in very good condition, but if you are not entirely satisfied please get in touch with us.