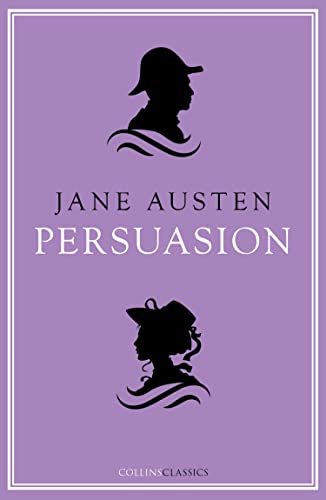 `She had been forced into prudence in her youth, she learned romance as she grew older: the natural sequel of an unnatural beginning.'

Written at the end of the Napoleonic Wars, Persuasion is a tale of love, heartache and the determination of one woman as she strives to reignite a lost love.

Anne Elliot is persuaded by her friends and family to reject a marriage proposal from Captain Wentworth because he lacks in fortune and rank. More than seven years later, when he returns home from the Navy, Anne realises she still has strong feelings for him, but Wentworth only appears to have eyes for a friend of Anne's.

Moving, tender, but intrinsically `Austen' in style, with it's satirical portrayal of the vanity of society in eighteenth-century England, Persuasion celebrates enduring love and hope.

Jane Austen (1775-1817) was an English novelist whose work centred on social commentary and realism. Her works of romantic fiction are set among the landed gentry, and she is one of the most widely read writers in English literature.

GOR009689935
9780008296476
0008296472
Persuasion (Collins Classics) by Jane Austen
Jane Austen
Collins Classics
Used - Very Good
Paperback
HarperCollins Publishers
2018-06-14
272
N/A
Book picture is for illustrative purposes only, actual binding, cover or edition may vary.
This is a used book - there is no escaping the fact it has been read by someone else and it will show signs of wear and previous use. Overall we expect it to be in very good condition, but if you are not entirely satisfied please get in touch with us
Trustpilot