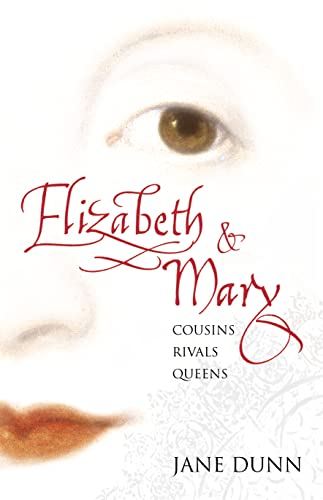 Elizabeth and Mary by Jane Dunn

This is the first biography of the fateful relationship between Elizabeth I and Mary Queen of Scots. It was the defining relationship of their lives and marked the intersection of the great Tudor and Stuart dynasties. At its core were their rival claims to the throne of England.

This is the first biography of the fateful relationship between Elizabeth I and Mary Queen of Scots. It was the defining relationship of their lives and marked the intersection of the great Tudor and Stuart dynasties. At its core were their rival claims to the throne of England.

Distinguished biographer Jane Dunn reveals an extraordinary story of two queens ruling in one isle, both embodying opposing qualities of character, ideals of womaliness and divinely ordained kingship. Theirs is a drama of sex and power, recklessness, ambition and political intrigue, with a rivalry that could only be resolved by death.

As regnant queens in an overwhelmingly masculine world they were deplored for their femaleness, compared unfavourably with each other, and courted by the same men. By placing this dynamic and ever-changing relationship at the centre of the book, Dunn throws new light and meaning on the complexity of their natures. She reveals an Elizabeth revolutionary in her insistence on ruling alone and inspired in her use of celibacy as a political tool, yet deeply feeling and more sympathetic than the usual picture of the virgin queen. Mary, too, is not the romantic victim of history but a courageous adventurer with a reckless heart, and a magnetic influence over men and women alike. Vengeful against her enemies and the more ruthless of the two, she was untroubled by plotting Elizabeth's murder. Elizabeth, however, was in anguish at having to sanction Mary's death warrant for treason.

Jane Dunn brings her skills as a biographer to bear on history's two most charismatic queens. Working almost exclusively from contemporary letters and writings, she lets them speak to us across more than 400 years, their voices and responses surprisingly familiar to our own, their characters vivid, by turns touching and terrible. The death in 1603 of Elizabeth, our greatest English queen, was to mark the end of the Tudors and the posthumous triumph of Mary, whose son, James I united the English and Scottish thrones under a Stuart king.

From the reviews of Jane Dunn's previous books:

`Jane Dunn is one of our best biographers.' Miranda Seymour, Sunday Times

`Jane Dunn has that sine qua non of the true biographer, an eye for significant detail and the power to fit it into a larger pattern.' Richard Holmes, The Times

Jane Dunn is the biographer of the relationship between Virginia Woolf and Vanessa Bell, Mary Shelley, and most recently a groundbreaking biography of Antonia White. She is Fellow of the Royal Society of Literature and lives in Bath.

GOR008084746
9780002571500
0002571501
Elizabeth and Mary: Cousins, Rivals, Queens by Jane Dunn
Jane Dunn
Used - Like New
Hardback
HarperCollins Publishers
2003-03-17
544
N/A
Book picture is for illustrative purposes only, actual binding, cover or edition may vary.
The book has been read, but looks new. The book cover has no visible wear, and the dust jacket is included if applicable. No missing or damaged pages, no tears, possible very minimal creasing, no underlining or highlighting of text, and no writing in the margins
Trustpilot