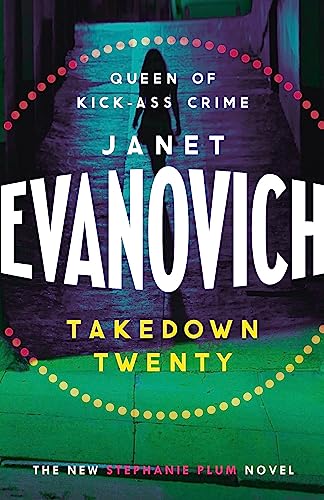 Stephanie must up her game for the ultimate takedown featuring a mobster, a murderer and a giraffe named Kevin. Takedown Twenty is No. 1 bestselling author Janet Evanovich's hilarious twentieth Stephanie Plum adventure

A notorious mob boss may take Stephanie out if she doesn't take him down first...

Stephanie Plum must up her game in Takedown Twenty, the hilarious twentieth adventure in the fiery Stephanie Plum series by bestselling author Janet Evanovich. The perfect read for fans of Harlan Coben and Lee Child.

Someone is killing old women and leaving them in dumpsters, and Stephanie's risking the wrath of the local police by investigating behind their backs.

And to top that, her latest bounty is the town's much-beloved vicious mobster, 'Uncle Sunny' Sunucchi.

Stephanie doesn't mind (that much) that the local Godfather is her boyfriend Morelli's actual godfather - but since they are almost her in-laws, she could do with the Family not trying to kill her for a while...

What readers are saying about Takedown Twenty:

'Lively and funny. All the usual characters, with Stephanie getting into trouble both at work and with her love life'

'Janet Evanovich does it again, pure comedy. She never fails to deliver'

'I am often to be found howling with laughter with tears rolling down my face whenever I read one of Janet Evanovich's books!'

* Sunday Times *
Making trouble and winning hearts * USA Today *
A laugh-out-loud page-turner * Heat *
Will delight [Evanovich's] legion of fans - and with good reason * Daily Mail *
Romantic and gripping, this novel is an absolute tonic * Good Housekeeping *
Among the great joys of contemporary crime fiction * GQ *
JANET EVANOVICH is the No. 1 New York Times bestselling author of the Stephanie Plum novels including Look Alive Twenty-Five and Hardcore Twenty-Four the Knight and Moon novels including Dangerous Minds, co-written with Phoef Sutton; the Fox & O'Hare series - The Heist, The Chase, The Job, The Scam and The Pursuit - co-written with Lee Goldberg; the Lizzy and Diesel novels including most recently Wicked Charms, co-written with Phoef Sutton. She has won several major crime fiction awards including the CWA John Creasey Award, Dilys Award and Silver Dagger. Janet's website can be found at www.evanovich.com. She is on Twitter - @janetevanovich - and Facebook - /JanetEvanovich.
GOR006097441
9781472201591
1472201590
Takedown Twenty: A laugh-out-loud crime adventure full of high-stakes suspense by Janet Evanovich
Janet Evanovich
Used - Very Good
Paperback
Headline Publishing Group
2014-06-17
352
N/A
Book picture is for illustrative purposes only, actual binding, cover or edition may vary.
This is a used book - there is no escaping the fact it has been read by someone else and it will show signs of wear and previous use. Overall we expect it to be in very good condition, but if you are not entirely satisfied please get in touch with us
Trustpilot