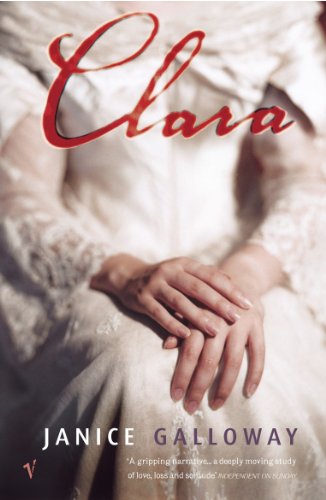 In Stock
£4.49
Based on the life of Clara Schumann, this novel considers the place of love in a life of increasing isolation and alienation. Clara, herself a celebrated pianist, composer and teacher, was the wife of Robert Schumann, and cared for him through a series of crippling mental illnesses.
Very Good
9 in stock

DISCOVER THE LIFE OF CLARA SCHUMANN, AS TOLD BY ONE OF OUR GREATEST LIVING STORYTELLERS 'A gripping narrative - a deeply moving study of love, loss and solitude' Independent on Sunday Janice Galloway's new novel is based on the life of Clara Schumann: celebrated nineteenth-century concert pianist and composer, editor and teacher, friend of Brahms - who was also the wife of Robert Schumann, the mother of his eight children, and the woman who cared for him through a series of crippling mental illnesses. Clara is a lyrical and vibrant account of two remarkable and highly dramatic musical careers, but primarily it is a novel about timeless, common things: about the inescapable influences of childhood, about creativity and marital life, about communication and silence, about how art is made and how art, in turn, may erode or save the life that nourishes it.

"Some of the greatest words ever written on thwarted love since Romeo and Juliet" * The Times *
"A powerful novel which brings two troubled and brilliant people back to life" * Sunday Telegraph *
"A razor-sharp blade of light... This is fiction's raising of Lazarus, miraculous, touched with wonder, grace and utter, steadfast belief in the life being resurrected... A work of intense, unflinching passion and conviction, written with Galloway's heart's blood" * The Times *
"Janice Galloway's exciting, vibrant third novel proves a virtuoso piece of storytelling...this obvious Booker contender is as compelling as the tormented players and music that inspired it" -- Eileen Battersby * Irish Times *
"You read Clara and you catch the music of another mind, and wherever it comes from Janice Galloway plays the notes to what sounds very much like perfection. This is a virtuoso performance" * Scotsman *

Janice Galloway's first novel, The Trick is to Keep Breathing, now widely regarded as a Scottish contemporary classic, was published in 1990 and won the MIND/Allan Lane Book of the Year. Her second novel, Foreign Parts, won the American Academy of Arts and Letters EM Forster Award while her third, Clara, about the tempestuous life of nineteenth-century pianist Clara Wieck Schumann, won the Saltire Award in 2002. Collaborative texts include an opera with Sally Beamish and three cross-discipline works with Anne Bevan, the Orcadian sculptor. Her 'anti-memoir', This is not about me, was published by Granta in September 2008 to universal critical acclaim. She lives in Lanarkshire

GOR001071588
Clara by Janice Galloway
Janice Galloway
Used - Very Good
Paperback
Vintage Publishing
2003-03-06
432
0099750511
9780099750512
Short-listed for Scottish Arts Council Book of the Year Award 2003 Short-listed for Saltire Society Scottish Book of the Year Award 2002
Book picture is for illustrative purposes only, actual binding, cover or edition may vary.
This is a used book - there is no escaping the fact it has been read by someone else and it will show signs of wear and previous use. Overall we expect it to be in very good condition, but if you are not entirely satisfied please get in touch with us.