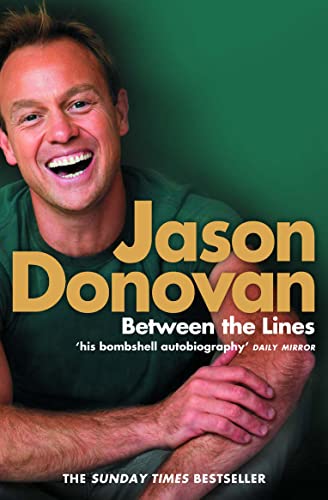 Between the Lines
by Jason Donovan

The ultimate Eighties heart-throb Jason Donovan came close to destroying his body, mind, soul and career with drugs. Never one to shy away from the truth, Jason writes candidly about Kylie and winning the battle with his demons in the paperback of his bestselling bombshell autobiography.

Between the Lines Summary

Between the Lines: My Story Uncut by Jason Donovan

The ultimate Eighties heart-throb Jason Donovan came close to destroying his body, mind, soul and career with drugs. Never one to shy away from the truth, Jason writes candidly about Kylie and winning the battle with his demons in the paperback of his bestselling bombshell autobiography.

Jason Donovan burst onto our TVs in the 80s as Scott Robinson from Neighbours, one half of TV couple Scott and Charlene with Kylie Minogue. Kylie and Jason became the celebrity couple of the eighties and released the number one Stock, Aitken and Waterman hit Especially For You in 1988.

But behind the squeaky-clean popstar image was a man increasingly addicted to recreational drugs and on a spiralling downwards path until the love of a good woman pulled him through.

His pop career launched, Jason went on to sell over 30 million records worldwide and appeared in West End musicals such as Joseph and His Technicolour Dreamcoat and, more recently, The Rocky Horror Show.

But just as Jason reached the pinnacle of his career, everything collapsed around him. When Jason sued style magazine The Face for calling him gay, the press tore him apart. Years of binge drug taking and partying to excess followed.

In his frank and honest account of his life, Jason talks candidly about the drugs that nearly saw the end of his career, about his relationship with the princess of pop, Kylie Minogue, and how he finally got his own very happy ending with the woman who saved him, his partner Angela and their two children.

Between the Lines Reviews

'[Jason] is so honest about the depth of his addiction that it's totally shocking' Polly Hudson, Daily Mirror

`his brutally honest autobiography. Jason is a man who likes to tell it like it is.' Hello magazine

Jason made his name as Scott Robinson in long-running Australian soap Neighbours, playing alongside his real-life partner Kylie Minogue. Especially For You, his duet with Kylie for Stock, Aitken and Waterman, was a number 1 single and Jason went on to be the biggest pop star of that time, with 17 hit singles in the UK between 1988 and 1993.
He also enjoyed huge success as the leads in the stage musicals Joseph and His Technicolor Dreamcoat and The Rocky Horror Show

GOR000934246
Between the Lines: My Story Uncut by Jason Donovan
Jason Donovan
Used - Very Good
Paperback
HarperCollins Publishers
2008-08-08
304
0007264429
9780007264421
N/A
Book picture is for illustrative purposes only, actual binding, cover or edition may vary.
This is a used book - there is no escaping the fact it has been read by someone else and it will show signs of wear and previous use. Overall we expect it to be in very good condition, but if you are not entirely satisfied please get in touch with us.