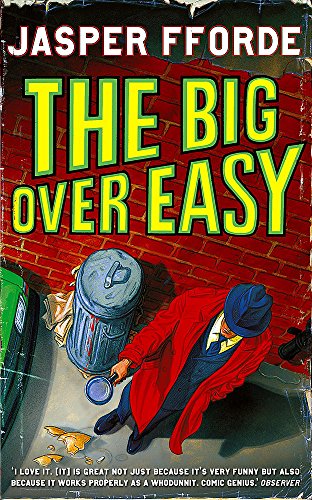 The Big Over Easy
by Jasper Fforde

A Sunday Times bestseller in hardback, THE BIG OVER EASY heralds the start of an ingenious new series from the creator of the international phenomenon Thursday Next.

The Big Over Easy Summary

The Big Over Easy: Nursery Crime Adventures 1 by Jasper Fforde

It's Easter in Reading - a bad time for eggs - and no one can remember the last sunny day. Humpty Dumpty, well-known nursery favourite, large egg, ex-convict and former millionaire philanthropist is found shattered beneath a wall in a shabby area of town.

As Jack and Mary stumble around the streets of Reading in Jack's Lime Green Austin Allegro, the clues pile up, but Jack has his own problems to deal with.

And on top of everything else, the Jellyman is coming to town...

The Big Over Easy Reviews

GOR000754253
The Big Over Easy: Nursery Crime Adventures 1 by Jasper Fforde
Jasper Fforde
Nursery Crime
Used - Very Good
Paperback
Hodder & Stoughton General Division
2006-06-08
416
0340897104
9780340897102
N/A
Book picture is for illustrative purposes only, actual binding, cover or edition may vary.
This is a used book - there is no escaping the fact it has been read by someone else and it will show signs of wear and previous use. Overall we expect it to be in very good condition, but if you are not entirely satisfied please get in touch with us.