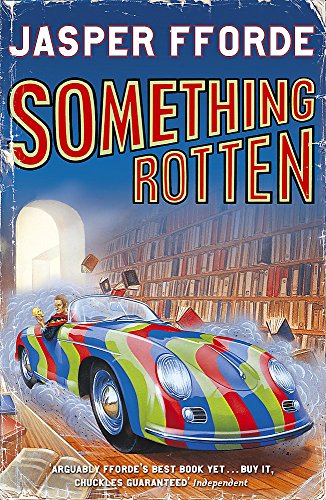 Something Rotten
by Jasper Fforde

Something Rotten: Thursday Next Book 4 by Jasper Fforde

The fourth book in the ingenious Thursday Next series, from Number One bestselling author Jasper Fforde.

'Don't ask, just read it. Fforde is a true original' - Sunday Express on Lost in a Good Book

Thursday Next, Head of JurisFiction and ex-SpecOps agent, returns to her native Swindon accompanied by a child of two, a pair of dodos and Hamlet, who is on a fact-finding mission in the real world. Thursday has been despatched to capture escaped Fictioneer Yorrick Kaine but even so, now seems as good a time as any to retrieve her husband Landen from his state of eradication at the hands of the Chronoguard.

It's not going to be easy. Thursday's former colleagues at the department of Literary Detectives want her to investigate a spate of cloned Shakespeares, the Goliath Corporation are planning to switch to a new Faith based corporate management system and the Neanderthals feel she might be the Chosen One who will lead them to genetic self-determination.

With help from Hamlet, her uncle and time-travelling father, Thursday faces the toughest adventure of her career. Where is the missing President-for-life George Formby? Why is it imperative for the Swindon Mallets to win the World Croquet League final? And why is it so difficult to find reliable childcare?

GOR001219524
Something Rotten: Thursday Next Book 4 by Jasper Fforde
Jasper Fforde
Thursday Next
Used - Very Good
Paperback
Hodder & Stoughton General Division
2005-04-11
416
0340825952
9780340825952
N/A
Book picture is for illustrative purposes only, actual binding, cover or edition may vary.
This is a used book - there is no escaping the fact it has been read by someone else and it will show signs of wear and previous use. Overall we expect it to be in very good condition, but if you are not entirely satisfied please get in touch with us.