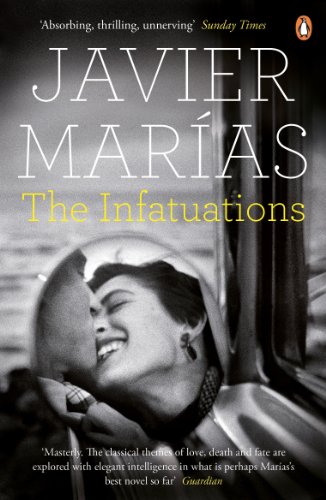 The Infatuations
by Javier Marias

Used Price
£5.19
New RRP £8.99
Free Shipping in the UK
Every day, Maria Dolz stops for breakfast at the same cafe. And every day she enjoys watching a handsome couple who follow the same routine. Then one day they aren't there, and she feels obscurely bereft.
Reviews:
Trustpilot
Very Good Good Well Read

The Infatuations by Javier Marias

The Infatuations is a critically acclaimed novel by the great Spanish writer Javier Marias.

Every day, Maria Dolz stops for breakfast at the same cafe. And every day she enjoys watching a handsome couple who follow the same routine. Then one day they aren't there, and she feels obscurely bereft.

It is only later, when she comes across a newspaper photograph of the man, lying stabbed in the street, his shirt half off, that she discovers who the couple are. Some time afterwards, when the woman returns to the cafe with her children, who are then collected by a different man, and Maria approaches her to offer her condolences, an entanglement begins which sheds new light on this apparently random, pointless death.

With The Infatuations, Javier Marias brilliantly reimagines the murder novel as a metaphysical enquiry, addressing existential questions of life, death, love and morality.

Praise for The Infatuations:

'Mesmerising . . . chillingly clear and hypnotically eerie . . . At this very fine and disturbing novel's core is a compelling meditation on love in all its ramifications' Herald

'Keeps us guessing until almost the last page' Financial Times

'Few writers have sustained such an engagement with the classic (Anglophone) canon. As a translator he has rendered into Spanish work by Hardy, Yeats, Conrad, Nabokov, Faulkner, Updike, Salinger and many others. As a novelist, he has threaded his work with traces of these writers, and is explicitly underpinned by an empathy with Shakespeare and Sterne, as well as Cervantes and Proust' Guardian

Javier Marias was born in Madrid in 1951. He has published thirteen novels, two collections of short stories and several volumes of essays. His work has been translated into forty-two languages and won a dazzling array of international literary awards.

Margaret Jull Costa has been a literary translator for over twenty-five years and has translated many novels and short stories by Portuguese, Spanish and Latin American writers, including Javier Marias, Fernando Pessoa, Jose Saramago, Bernardo Atxaga and Ramon del Valle-Inclan.

Mesmerising . . . At this very fine and disturbing novel's core is a compelling meditation on love in all its ramifications * Herald *
The real pleasure is in the strange things his narrators do to the business of narration. Marias has discovered a unique form -- Adam Thirlwell * TLS *
Plotted with tremendous skill and elegance, this cerebral tale is entirely absorbing * Daily Mail *
The classical themes of love, death and fate are explored with elegant intelligence by Marias in what is perhaps his best novel so far' -- Alberto Manguel * Guardian *
Marias at his most haunting * Financial Times *
No one else, anywhere, is writing quite like this -- Tim Martin * Daily Telegraph *
Absorbing and unnerving . . . powered by the pressure of good old-fashioned suspense * Sunday Times *
A murder mystery that's also a brilliant meditation on life, love and death -- Robert McCrum * Observer *

Javier Marias (Author)
Javier Marias is the author of sixteen works in Spanish, which have been translated into forty-five languages including English. His translated English works are All Souls, A Heart So White, Tomorrow in the Battle Think on Me, When I Was Mortal, Dark Back of Time, The Man of Feeling, Voyage Along the Horizon, Written Lives, the Your Face Tomorrow trilogy (Fever and Spear, Dance and Dream and Poison, Shadow and Farewell), Bad Nature, While the Women Are Sleeping, The Infatuations, Thus Bad Begins and, Venice, An Interior. Javier Marias has received numerous literary prizes including the International IMPAC Dublin Literary Award and the Prix Formentor. He lives and works as a translator and columnist in Madrid.

GOR005483029
The Infatuations by Javier Marias
Javier Marias
Used - Very Good
Paperback
Penguin Books Ltd
2014-02-27
352
0241958490
9780241958490
N/A
Book picture is for illustrative purposes only, actual binding, cover or edition may vary.
This is a used book - there is no escaping the fact it has been read by someone else and it will show signs of wear and previous use. Overall we expect it to be in very good condition, but if you are not entirely satisfied please get in touch with us.