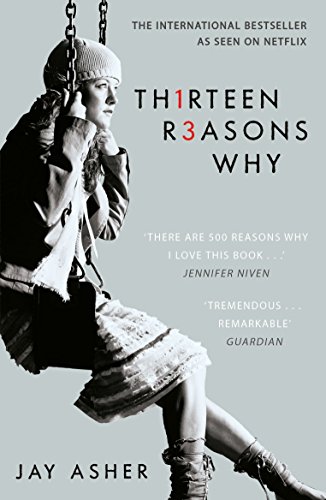 Thirteen Reasons Why
by Jay Asher

In Stock
£3.99
Clay Jensen returns home to find a strange package with his name on it. Inside he discovers several cassette tapes recorded by Hannah Baker - his classmate and first love - who committed suicide. Hannah's voice explains there are thirteen reasons why she killed herself and Clay is one of them. If he listens, he'll find out why.
Very Good
62 in stock

Thirteen Reasons Why by Jay Asher

**The second season of the Golden Globe nominated Thirteen Reasons Why is now on Netflix.**

Read the sensational book that has taken the YA world by storm.

You can't stop the future. You can't rewind the past. The only way to learn the secret . . . is to press play.

Clay Jensen comes home from school to find outside his front door a mysterious box with his name on it.

Inside he discovers a series of cassette tapes recorded by Hannah Baker - his classmate and crush. Only, she committed suicide two weeks earlier.

On the first tape, Hannah explains that there are 13 reasons why she did what she did - and Clay is one of them.

If he listens, Clay will find out how he got onto the list - what he hears will change his life forever.

Perfect for fans of The Fault In Our Stars and All the Bright Places.

Praise for Thirteen Reasons Why:

'There are 500 reasons why I love this book . . .' Jennifer Niven author of All the Bright Places

If you're affected by any of the issues raised in Thirteen Reasons Why, click below for a list of UK-based support organisations that can help.

A dizzying ride of suspense and revelation -- Kathryn Hughes * Guardian *
A stealthy hit with staying power . . . thriller-like pacing * New York Times *
Thirteen Reasons Why is a mystery, eulogy, and ceremony. I know, in the years to come, I will often return to this book -- Alexie Sherman, author of the award-winning DIARY OF A PART-TIME INDIAN
Readers won't be able to pull themselves away . . . * Publishers Weekly *

Jay Asher's bestselling debut novel, Thirteen Reasons Why has been adapted into a 13-part series on Netflix. He got the idea for the novel while listening to a museum audio tour - he was struck by the eeriness of the voice in his ear, a woman who described everything he was looking at, but wasn't there. His novels have been translated into thirty-seven languages.

GOR001435111
Thirteen Reasons Why by Jay Asher
Jay Asher
Used - Very Good
Paperback
Penguin Books Ltd
2009-08-06
320
0141328290
9780141328294
N/A
Book picture is for illustrative purposes only, actual binding, cover or edition may vary.
This is a used book - there is no escaping the fact it has been read by someone else and it will show signs of wear and previous use. Overall we expect it to be in very good condition, but if you are not entirely satisfied please get in touch with us.