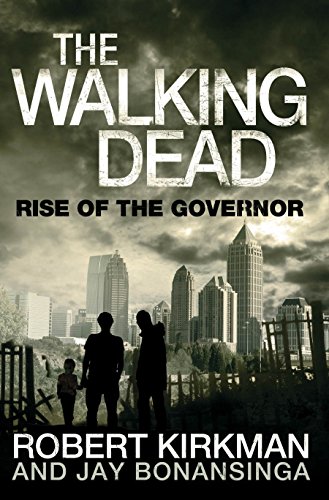 Rise of the Governor
by Jay Bonansinga

Used Price
£2.69
New RRP £7.99
Free Shipping in the UK
The beginning of the bestselling series set in the world of Robert Kirkman's hugely successful comic books, and based on the award-winning TV series The Walking Dead.
Like New Very Good

Rise of the Governor Summary

Rise of the Governor by Jay Bonansinga

Based on The Walking Dead comic books and the TV series starring Andrew Lincoln, Rise of the Governor is the first novel in the New York Times bestselling series by Robert Kirkman and Jay Bonansinga.

Philip Blake's life has been turned upside down. In less than seventy-two hours an inexplicable event has resulted in people . . . turning. The world has gone to hell and the walking dead roam the streets slaughtering the living. Escaping their small town, Philip has just one focus in life - to protect his young daughter Penny. And he'll do whatever it takes to ensure she survives . . .

Set in an apocalyptic world created by Robert Kirkman this is fast-paced, action-packed storytelling about the lengths some men will go to survive. With new characters, new storylines and with the same in-depth character-based plotting that has made the television series such an immediate success, this is sure to be a hit with fans of zombie thrillers.

Rise of the Governor Reviews

First came the groundbreaking and bestselling comic book series. . . . "Every issue sinks its teeth in you and refuses to let go until the next one comes out."--"Ain't It Cool News"Then came the record-breaking AMC television show. . . . "The best new show on television.""--Entertainment Weekly"And now comes the first in a series of novels exploring the origins of fan favorite characters from "The Walking Dead" universe. . . . "If the comic book writer Robert Kirkman were a superhero, his name might be the Midas Touch.""--The New York Times"In "The Walking Dead: Rise of the Governor, " the world will finally understand what drove Philip Blake to become . . . The Governor.

Jay Bonansinga is a writer of thrillers, whose novels have been translated into numerous languages. His debut novel, The Black Mariah, was a finalist for a Bram Stoker award, and his short stories and articles have been widely published in magazines and anthologies. He has worked with Robert Kirkman writing the New York Times bestselling series of novels, The Walking Dead. He currently lives in Illinois with his wife and two sons, has a Master's in film and is a visiting professor at Northwestern University in their Creative Writing for the Media program, as well as the Graduate Writing Program at DePaul University.

GOR007326457
Rise of the Governor by Jay Bonansinga
Jay Bonansinga
The Walking Dead
Used - Like New
Paperback
Pan Macmillan
2011-10-21
320
0330541331
9780330541336
N/A
Book picture is for illustrative purposes only, actual binding, cover or edition may vary.
This is a used book - there is no escaping the fact it has been read by someone else and it will show signs of wear and previous use. Overall we expect it to be in very good condition, but if you are not entirely satisfied please get in touch with us.