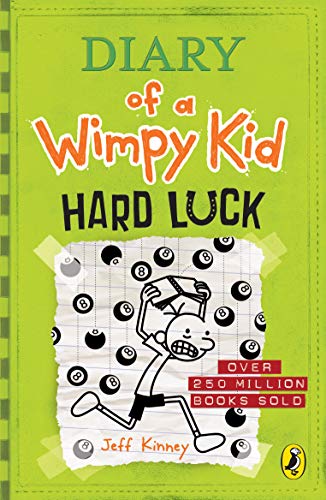 In Stock
£4.99
Greg Heffley's on a losing streak. His best friend, Rowley Jefferson, has ditched him, and finding new friends in middle school is proving to be a tough task. To change his fortunes, Greg decides to take a leap of faith and turn his decisions over to chance. Will a roll of the dice turn things around?
Like New Very Good Good Well Read
31 in stock

THE ONE WHERE GREG NEEDS A NEW FRIEND

Things haven't been going all that well for Greg Heffley recently.

For one thing, his best friend Rowley has a GIRLFRIEND, so now Greg is in the market for a new best friend.

But after he's spent so long training him to be the perfect best friend, finding a 'new Rowley' won't be easy.

And to top it off, his family (including his feral cousins) are coming to stay.

Can Greg improve his luck before it's too late?

ABOUT DIARY OF A WIMPY KID:
* 50% words, 50% cartoons, 100% hilarious!
* Hilarious stories that all readers can't wait to get their hands on
* Laughter guaranteed
* 200 million copies sold worldwide

*Don't miss Diary of an Awesome Friendly Kid , to read Greg's best friend Rowley's side of the story!*

Jeff Kinney is the #1 USA Today, New York Times, and Wall Street Journal bestselling author of the Diary of a Wimpy Kid series and a six-time Nickelodeon Kids' Choice Award winner for Favorite Book. Wrecking Ball, book 14, was published in November 2019, and was an instant #1 global bestseller. Diary of an Awesome Friendly Kid: Rowley Jefferson's Journal was published in April 2019, was an instant #1 global bestseller, and has remained at the top of the New York Times bestseller list since publication. Jeff has been named one of Time magazine's 100 Most Influential People in the World. He is also the creator of Poptropica, which was named one of Time's 50 Best Websites. He spent his childhood in the Washington, D.C., area and moved to New England in 1995. Jeff lives with his wife and two sons in Massachusetts, where they own a bookstore, An Unlikely Story.

GOR006489154
Diary of a Wimpy Kid: Hard Luck (Book 8) by Jeff Kinney
Jeff Kinney
Diary of a Wimpy Kid
Used - Very Good
Paperback
Penguin Books Ltd
2015-01-29
240
0141355484
9780141355481
N/A
Book picture is for illustrative purposes only, actual binding, cover or edition may vary.
This is a used book - there is no escaping the fact it has been read by someone else and it will show signs of wear and previous use. Overall we expect it to be in very good condition, but if you are not entirely satisfied please get in touch with us.