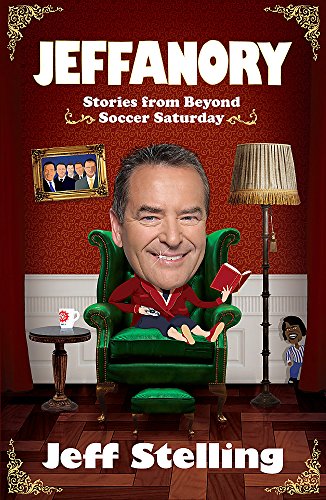 Jeffanory: Stories from Beyond Soccer Saturday
by Jeff Stelling

In Stock
£3.99
TV's most popular sports broadcaster returns with the funniest and maddest stories from the unhinged world of football.
Very Good
7 in stock

Are you sitting comfortably? Then Jeff will begin ... The universally-loved, award-winning host of Sky Sports' Soccer Saturday and Channel 4's Countdown, and author of the bestselling Jelleyman's Thrown a Wobbly, returns with a Jackanory-style, football-flavoured narrative which gathers together the funniest, weirdest, most tragic, most heart-warming, under-the-radar stories of the football season. The book is stuffed to the gunnels with behind-the-scenes revelations, opinions and personal anecdotes from Jeff, and has a strong leaning towards the absurdities of both the highest levels and the grass-roots of the game. From the Macclesfield goalkeeper booked for using a golf tee to take his goal kicks, to the unintelligible ranting and raving of South American dictator chairmen. Let Jeff be your trusted guide through the madness of the football season, and let Jeffanory supply you with a veritable treasure trove of great anecdotes to take to the pub

Jeff Stelling is a lifelong supporter of his hometown side, Hartlepool United. He was a presenter on LBC's Sportswatch programme in the early 1980s before moving to BBC Radio 2's Sport on 2. He later spent time as a sports newsreader before moving to Sky in 1992 to present coverage of horse racing, snooker and darts. Three years later Jeff became presenter of what is now called Soccer Saturday. In 2010 he was voted Sports Broadcast Journalist of the Year for the fifth year running, and he has also been the presenter of Channel 4's Countdown programme. In 2011 he started hosting Sky Sport's coverage of the Champions League

GOR004718222
Jeffanory: Stories from Beyond Soccer Saturday: Stories from Beyond the Videprinter by Jeff Stelling
Jeff Stelling
Used - Very Good
Paperback
Headline Publishing Group
2013-05-09
320
0755363477
9780755363476
N/A
Book picture is for illustrative purposes only, actual binding, cover or edition may vary.
This is a used book - there is no escaping the fact it has been read by someone else and it will show signs of wear and previous use. Overall we expect it to be in very good condition, but if you are not entirely satisfied please get in touch with us.