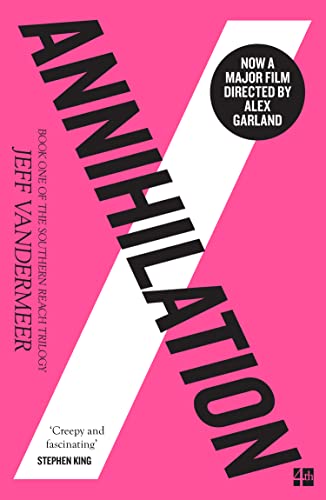 For thirty years, Area X has remained mysterious and remote behind its intangible border - an environmental disaster zone, though to all appearances an abundant wilderness.

The Southern Reach, a secretive government agency, has sent eleven expeditions to investigate Area X. One has ended in mass suicide, another in a hail of gunfire, the eleventh in a fatal cancer epidemic.

Now four women embark on the twelfth expedition into the unknown.

Praise for ANNIHILATION and the SOUTHERN REACH TRILOGY:

`Hauntingly weird and brilliantly new ... These are contemporary masterpieces and career-defining novels' Adam Robert, Books of the Year, Guardian

`This trilogy is a modern mycological masterpiece ... Remarkable ... Tense, eerie and unsettling ... VanderMeer writes much better prose than Poe ever did ... This is genuinely potent and dream-haunting writing. VanderMeer has arrived' Guardian

`A teeming science fiction that draws on Conrad and Lovecraft alike ... Annihilation shows signs of being the novel that will allow VanderMeer to break through to a new and larger audience' Sunday Telegraph

`A lasting monument to the uncanny ... You find yourself afraid to turn the page' Guardian

`VanderMeer's novel is a psycho-geographical tour de force, channelling Ballard and Lovecraft to instil the reader with a deep, delicious unease' Financial Times

`What a haunting book this is, lodging deep in the memory in similar fashion to otherworldly classics such as David Lindsay's A Voyage To Arcturus ... Annihilation is so disquietingly strange as to defy summarisation. Read it' Daily Mail

`Astonishing, frightening, spectacular ... I hope the trilogy will come to be seen not only as the instant sci-fi classic it is, but also as Literature' New Statesman

`A tense and chilling psychological thriller about an unravelling expedition and the strangeness within us. A little Kubrick, a lot of Lovecraft, the novel builds with an unbearable tension and claustrophobic dread that lingers long afterwards. I loved it' Lauren Beukes

Jeff VanderMeer is an award-winning novelist and editor. His fiction has been translated into twenty languages and has appeared in the Library of America's American Fantastic Tales and in multiple year's-best anthologies. He writes non-fiction for the Washington Post, the New York Times Book Review, the Los Angeles Times, and the Guardian, among others. He grew up in the Fiji Islands and now lives in Tallahassee, Florida, with his wife.

GOR006901307
Annihilation by Jeff VanderMeer
Jeff VanderMeer
Used - Very Good
Paperback
HarperCollins Publishers
2015-07-20
208
0008139105
9780008139100
N/A
Book picture is for illustrative purposes only, actual binding, cover or edition may vary.
This is a used book - there is no escaping the fact it has been read by someone else and it will show signs of wear and previous use. Overall we expect it to be in very good condition, but if you are not entirely satisfied please get in touch with us.