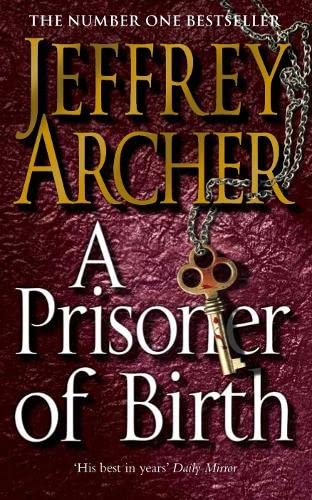 A Prisoner of Birth
by Jeffrey Archer

In Stock
£4.49
The new blockbuster from one of the bestselling authors of all time
Like New Very Good
Only 1 left

A Prisoner of Birth Summary

Although the two young men don't meet, their lives will never be the same again.

Jeffrey Archer, whose novels and short stories include Kane and Abel, A Prisoner of Birth and Cat O' Nine Tales, has topped the bestseller lists around the world, with sales of over 270 million copies. He is the only author ever to have been a number one bestseller in fiction (seventeen times), short stories (four times) and non-fiction (The Prison Diaries). The author is married with two sons and lives in London and Cambridge. www.jeffreyarcher.com Facebook.com/JeffreyArcherAuthor @Jeffrey_Archer

GOR010551236
A Prisoner of Birth by Jeffrey Archer
Jeffrey Archer
Used - Like New
Paperback
Pan Macmillan
2008-10-17
624
033046406X
9780330464062
N/A
Book picture is for illustrative purposes only, actual binding, cover or edition may vary.
The book has been read, but looks new. The book cover has no visible wear, and the dust jacket is included if applicable. No missing or damaged pages, no tears, possible very minimal creasing, no underlining or highlighting of text, and no writing in the margins.