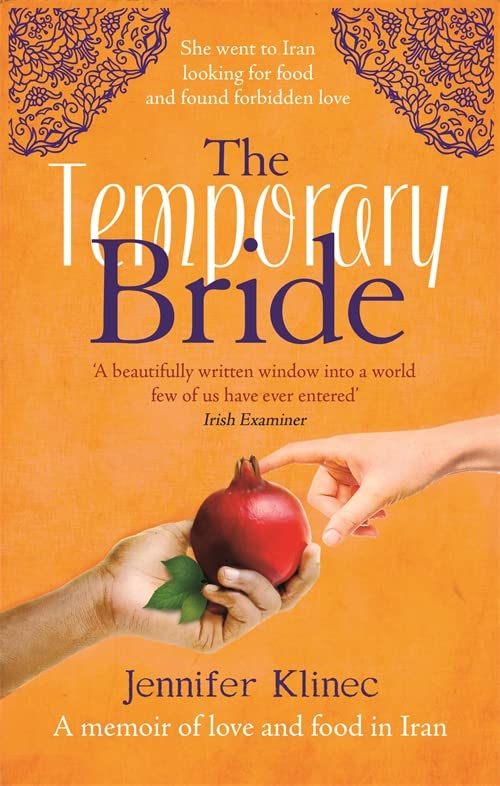 The Temporary Bride by Jennifer Klinec

Moving, fascinating and full of the sights, smells and tastes of Iran,this is a heart-warming tale of love against the odds.

The Temporary Bride: A Memoir of Love and Food in Iran by Jennifer Klinec

A relationship was a mathematical formula: the correct variables of age, beauty, morality and finances were entered and the output was a successful, peaceful marriage. It couldn't be, therefore, that their Iranian son could feel desire for someone six years his senior,someone who didn't come to him pure and untouched. I was an amusing visitor from another world and soon enough I should return to it, fading quietly into an anecdote ...

In her thirties, Jennifer Klinec abandons a corporate job to launch a cooking school from her London flat. Raised in Canada to Hungarian-Croatian parents, she has already travelled to countries most people are fearful of, in search of ancient recipes. Her quest leads her to Iran where, hair discreetly covered and eyes modest, she is introduced to a local woman who will teach her the secrets of the Persian kitchen.

Vahid, her son, is suspicious of the strange foreigner who turns up in his mother's kitchen; he is unused to seeing an independent woman. But a compelling attraction pulls them together and then pits them against harsh Iranian laws and customs.

Getting under the skin of one of the most complex and fascinating nations on earth, The Temporary Bride is a soaring story of being loved, being fed, and the struggle to belong.

A moving meditation on love across cultures and the evocative power of food * The Lady *
A cross-cultural romance with a backdrop of Middle Eastern cuisine. Conveys the fear and excitement experienced by a couple trying to get to know each other in a strictly controlled society * Herald *
The writing is vivid and sensual, the city of Yazd where she stays comes alive - the people, the streets, the scents, and her description of, among other things, a slaughterhouse is powerful. I wouldn't be surprised if this becomes a film * Sydney Morning Herald *
The Temporary Bride is a beautifully written window into a world few of us have ever entered: contemporary Iran in all its complexity. Its sprawling cities and street-side eateries come to life, but most vivid is the portrait of ordinary Iranians: cooking, sharing, living, in a world where Westerners are unwelcome. A book for travellers - of the world and the senses * Irish Examiner *
This is amour sans frontieres. An adventure in a globalised world. Love laughs at rigorously controlled borders * The Times *
A moving memoir about love against the odds * Good Housekeeping - Best non-fiction *

Jennifer Klinec went to Iran looking for food and found forbidden love. She writes about both with equal eloquence
and panache. An absorbing, page-turning tale of one strong woman's curiosity and daring that ventures behind Iran's closed doors

-- Anya Von Bremzen, author of Mastering the Art of Soviet Cooking: A Memoir of Food and Longing
Born in Canada, Jennifer Klinec lives and works in London.
GOR006638362
9781844088249
1844088243
The Temporary Bride: A Memoir of Love and Food in Iran by Jennifer Klinec
Jennifer Klinec
Used - Very Good
Paperback
Little, Brown Book Group
2015-09-03
288
Winner of Reading Group Newcomer Award 2015 (UK)
Book picture is for illustrative purposes only, actual binding, cover or edition may vary.
This is a used book - there is no escaping the fact it has been read by someone else and it will show signs of wear and previous use. Overall we expect it to be in very good condition, but if you are not entirely satisfied please get in touch with us
Trustpilot